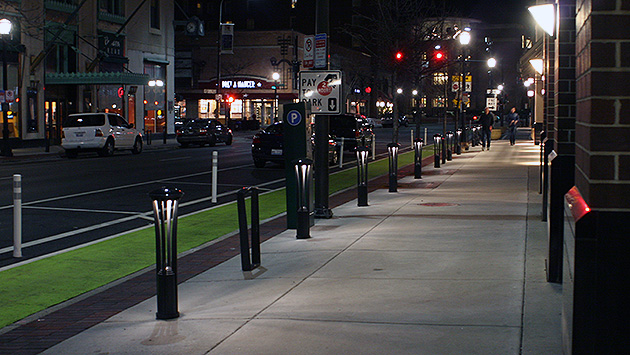 City staff had proposed the lights — like ones installed last year on Church Street — as part of the street paving project on Davis this summer.

After that plan drew criticism from aldermen earlier this year, Public Works Director Suzette Robinson presented a revised plan Monday that proposed using less expensive fixtures spaced further apart so that six blocks of Davis Street could be lit for a total of $180,000 — compared to the $171,000 cost of the fixtures that now light three blocks of Church Street.

But that idea didn't win many fans either.

"As usual we're overspending on projects when we don't have the money to do so," Alderman Coleen Burrus, 9th Ward, said.

And Alderman Melissa Wynne, 3rd Ward, said she believed the lights on Church "don't provide any function and only add to street clutter."

But Alderman Judy Fiske, 1st Ward, said she likes the pedestrian lights and that she has heard from residents of downtown retirement communities who say the lights make them feel safer walking around downtown at night.

Wynne suggested increasing the wattage of the existing street lights, but Robinson said the lights are already at the maximum wattage the system can handle.

Alderman Ann Rainey, 8th Ward, said the city might consider in the future adding downlighting on the current poles — like what she said has been done on Howard Street. Those lights, she said, don't create additional obstructions on the sidewalks.

In the end, only Fiske, plus aldermen Delores Holmes, 5th Ward, and Jane Grover, 7th Ward, voted to keep the pedestrian lights in the plan.