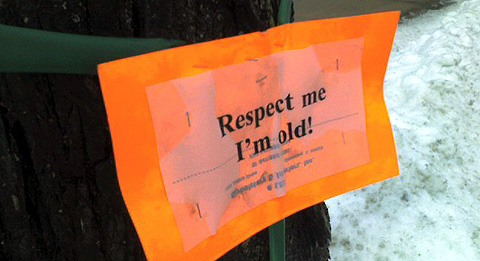 Elm tree lovers tied ribbons and signs to some trees, like this one on Church Street near Ridge Avenue.

Eight residents, most single-family homeowners, pleaded for the city to keep spending $338,000 a year on injections designed to prolong the life of the city’s remaining elm trees.

Barbara Janes of 802 Colfax St. said she still has "two huge, gorgeous elms" on the parkway of her home but has lost three or four others.

She claimed that if the city sent a letter to homeowners asking if they’d personally contribute to the cost of the injection program, 75 percent would say yes.

He said the injection program has cut the loss of trees from about 250 to 100 per year.

Without the injection program, nearly all the remaining elm trees might be gone in a decade, but with it the city could end up spending $5 million over the next 30 years to hang onto a still-dwindling number of trees.

Gaynor has said the labor cost for city forestry crews is about the same, whether they spend their time pumping chemicals into the trees or cutting them down.

In response to questions from the aldermen, City Manager Julia Carroll said she would provide more information about the costs and benefits of the program.

Jessica Clarke of 1506 Florence Ave., said the programs would help keep young people out of trouble. She said that without such programs, police calls to Mason Park and nearby Penny Park had increased dramatically over the past year.

But Community Development Director James Wolinski said the fee would merely recover the cost of operating the inspection program, something the city’s legal staff has said the city is legally entitled to do.

Pat Corirossi of 1640 Maple Ave. urged the aldermen to do benchmark comparisons of city spending to levels in comparable communities.

She suggested that, although difficult, cutting services and staff would be the fiscally responsible approach to dealing with the city’s pension funding crisis.