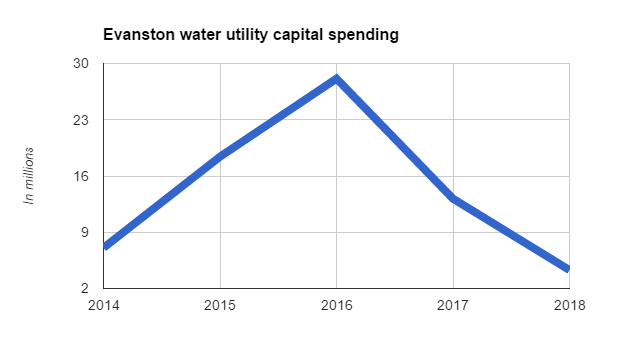 Faced with dramatic increases in anticipated capital improvement costs over the next few years, Evanston aldermen are scheduled to approve a 10 percent increase in water rates tonight.

The its the second of three 10 percent annual increases planned as the city prepares to make major improvements to its aging water infrastructure.

City officials say the increase will cost the average resident about $21 a year and that after the increase Evanston's water rate will remain less than half the average rate charged by a sampling of 18 other metro-area communities.

Evanston has invested heavily in new sewer infrastructure over the past couple of decades, and that has meant much higher sewer rates. Combining water and sewer charges, Evanston's new rate will place it higher than 10 and lower 8 of the other towns — edging up from the absolute middle of the pack this year.

The rate increase is expected to generate about $625,000 a year in revenue to help reduce the amount of debt the city needs to take on to finance the capital improvements.

Water rates in Evanston weren't increased between 1998 and 2010, but have been rising each year since then.

Major capital project planned over the next few years include repair or replacement of finished water reservoirs at the plant, some of which are now a century old; painting the city's two water towers and replacing a 30-inch water main running down Sheridan Road to downtown Evanston.

The aldermen tonight are also scheduled to approve the city's 2015 budget and the tax levies to fund it.