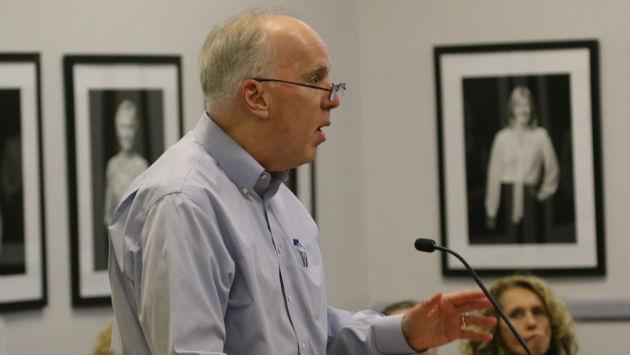 Evanston aldermen Monday night voted to take no action on a report from the city’s Board of Ethics that recommended Alderman Ann Rainey, 8th Ward, be barred from voting on issues related to the Harley Clarke mansion.

In doing so they agreed with the argument of Art Newman, the former alderman who served as Rainey’s attorney on the ethics issue.

While the board found Rainey had violated the ethics code by failing to be impartial on the mansion issue, Newman said, “Elected officials get to be biased.”

They’re expected to take positions on controversial issues, Newman said, and to advocate for those positions.

The ethics board, Newman added, “did not find any conflict of interest — she had no personal interest in the mansion.”

She was doing the same thing she’s been doing for 30 years on the City Council, he added, “voting her conscience.”

The vote by the Rules Committee to “accept and file” the board’s report without taking any action against Rainey was 5-4, with Mayor Steve Hagerty, and aldermen Don Wilson, Tom Suffredin and Cicely Fleming voting in opposition.

With Alderman Robin Rue Simmons absent from the meeting, Rainey’s own vote ended up being decisive.

Based on discussion during the meeting it appeared that at least some of those on the losing side of the vote would have favored a motion to censure Rainey for having used rude language in speaking to one resident who favors preserving the mansion and perhaps for having used her city email account to encourage people to donate to the group raising funds to demolish the building.

Censure was the only sanction that Corporation Counsel Michelle Masoncup said was available to the committee under the City Council’s rules.

Several aldermen said they believed the city’s ethics code needs to be rewritten to more clearly distinguish aldermen — who are expected to advocate for policy positions as part of their job — from other city employees, who are expected to be impartial in dealing with residents doing business with the city.

The aldermen are expected to begin a discussion of possible revisions to the ethics code at the Jan. 22 meeting of the Rules Committee.