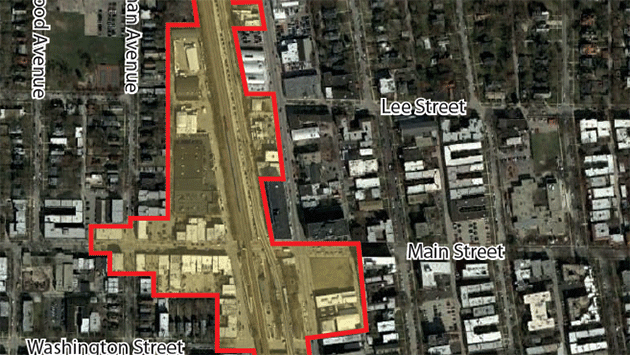 The vote split the two aldermen whose wards include portions of the TIF district, with Alderman Melissa Wynne, 3rd Ward, voting for the plan and Alderman Don Wilson, 4th Ward, voting no.

Wynne said said the approval of the district would be "a transformational moment" for Evanston and predicted the project would be an enormous success, bringing new office development and infrastructure improvements to the area.

Wilson, who had successfully pressed city staff to add an advisory committee of local merchants and residents to review TIF plans throughout the life of the project, didn't explain his vote at the council meeting, but he had previously expressed doubts about the merits of the plan.

In another change sought by Wilson, it specified that TIF funds could only be use for the project on the vacant lot at Chicago and Main if it was developed for office and retail use — not residential.

Top: The TIF district is centered on the Chicago-Main intersection, but extends along the rail lines from Oakton to Dempster streets. Above: A rendering of an office building proposed for the southeast corner of the intersection.

Alderman Coleen Burrus, 9th Ward, however, blasted the project. She said the area is not the sort of blighted neighborhood intended to be the site of a TIF district under state law.

Burrus said the TIF seems to be design primarily to benefit the developer of the proposed office building on the vacant lot at the southeast corner of the Chicago and Main intersection.

The TIF documents envision spending up to $10 million of city funds to aid the project which is estimated to have a total price tag of $20 million to $30 million.

Burrus said a recent report from business students at Northwestern indicated there's little demand for office space there. And, if there was great demand, Burrus said, the developer would have been able to get private funding for the project.

Addition of the community advisory panel soothed concerns of local merchants that they might be driven out by the TIF.

Alderman Ann Rainey, 8th Ward, voted for the TIF but said it was "the least exciting" of all the TIF district proposals that she's seen in her quarter century on the council.

City Manager Wally Bobkiewicz said the plans for the TIF district have already helped stimulate other improvements in the neighborhood.

He cited the $1 million state grant to establish gigabit-speed internet service and the Regional Transportation Authority's agreement to provide 80 percent of the cost of a $125,000 transit-oriented development study that was also approved by the council Monday.

During public comment, John Szostek of the Piccolo Theatre, who heads the Main Street merchants association, said he "likes the way our future looks" with the TIF.

And Steve Ross of AMLI, which is building a large rental apartment complex on Chicago Avenue at Kedzie Street, said the added jobs and economic development in the area promised by the TIF would help create demand for the apartments at the AMLI development.