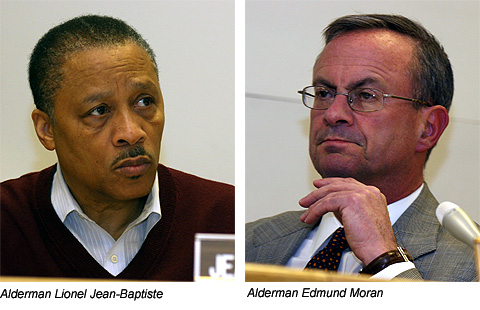 Aldermen on Evanston's Human Services Committee split Monday over how to address the issue of illegal immigration.

Some speakers from the audience suggested stronger efforts to discourage immigration.

But the aldermen disagreed about whether to just call for more open federal immigration policies or to also codify existing city practices supportive of immigrants.

"Were the stations on the underground railroad marked?" Jean-Baptiste asked. "You want a big flag, a target on the City of Evanston. I suggest this would bring attention to ourselves where we do not need the attention."

"It will be a calamity for any individuals" immigration authorities "eventually catch and bring to jail and put through deportation."

"Where we should aim our arrow should be at the target," reforming immigration policy, he added.

But Alderman Edmund Moran, 6th Ward, who favored a version of the resolution that would direct city employees to ignore a person's immigration status when rendering services, said he believes those fears are unfounded, given that Cook County has already adopted a resolution with similar language.

"If Cook County has not been retaliated against," Moran said, "Then the City of Evanston will not be if it adopts this resolution."

Aldermen Steve Bernstein, 4th Ward, and Delores Holmes, 5th Ward, called for postponing action on the resolution until the city's legal staff could determine whether language in either version would put the city at legal risk.

Bernstein, the committee chair, said the issue would be back on the committee's agenda for its March 3 meeting and that it would "probably be April" before the issue gets to the full City Council.