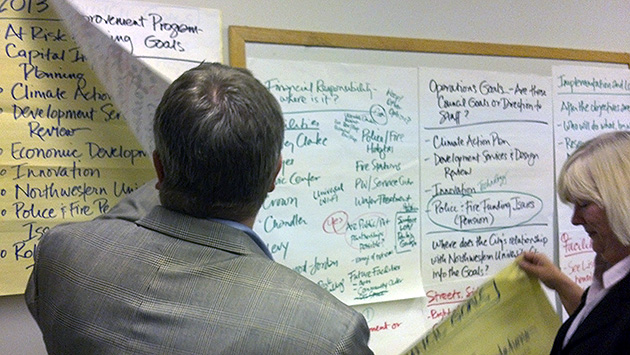 Evanston aldermen Monday came up with a pared down list of priorities to guide their activities over the next few years.

Evanston aldermen Monday came up with a pared down list of priorities to guide their activities over the next few years.

In a three-hour meeting in the aldermanic library facilitated by Jean Bonander, a retired city manager from Larkspur, Calif., the aldermen took what had been a list of 14 goals set for this year and trimmed them to six, grouped under two headings.

The pruning came after Bonander said of the old list that "this is an awful lot of goals, and it doesn't have much clarity."

Under capital needs, the aldermen and Mayor Elizabeth Tisdahl decided that better managing city facilities, streets and the water utility would be their top three goals.

And, under programmatic needs, they ranked economic development, aiding at-risk families and controlling the city's debt level as their most important goals.

To some extent prior goals got folded into the new, shorter list

Services to Latinos, youth and seniors seemed to be grouped under the "at-risk families" label.

And capital improvement program planning, Robert Crown Center improvements and visual and performing arts could be treated as part of the new city facilities goal.

But a few other earlier goals appeared to fall off the list — including the climate action plan, development services and design review, innovation, Northwestern University, safety issues — apparently because the aldermen felt most were now running more smoothly.

Having agreed on new goals, Bonander suggested the aldermen still needed to set objectives for each and outline a plan for how to achieve the objectives and how to find the money to accomplish them.

City Manager Wally Bobkiewicz said he hoped to schedule another special meeting early in September to start working through those issues just ahead of the start of discussion in October about the city's 2014 budget.

A week after deciding to reject a possible sale of the city-owned Harley Clarke mansion, much of the discussion Monday centered around how to come up with the funds to maintain the city's seven police and fire facilities, three recreation centers, two arts centers, senior center, the civic center, the municipal service center and all the city's parks and streets

Alderman saw some hope of generating new revenue that could cover some of those costs from expansion of the city's water utility, but voiced fears that the unfunded pension liability for public safety employees could put an ever tighter squeeze on city finances.