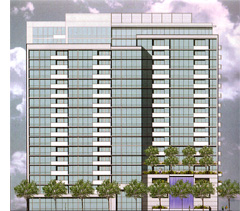 Two weeks ago the aldermen voted unanimously to reject recommendations from the Plan Commission and city staff to turn down the proposal and ordered the legal staff to draft an ordinance that would approve it.

The Plan Commission and city staff argued that the development, called Carroll Place, is too tall and bulky for the site.

The project has been redesigned twice since it was first unveiled last fall, with the latest redesign by a new architectural firm.

The project now includes 247 parking spaces inside the building and 1,370 square feet of retail space in a building 185 feet high. The initial plan had called for only one parking space per unit.

The developer last week agreed to make a $1,000 per unit contribution to the city’s affordable housing fund, to contribute $35,000 either for job training programs or to repaint the Metra viaduct at Emerson and Ridge, and to employ 20 Evanston residents in building the project.

Existing zoning for the property, on the southeast corner of Emerson and Oak, limits buildings to 85 feet. The site has been vacant for about two decades and office building on either side of it in the Research Park development have extremely high vacancy rates.