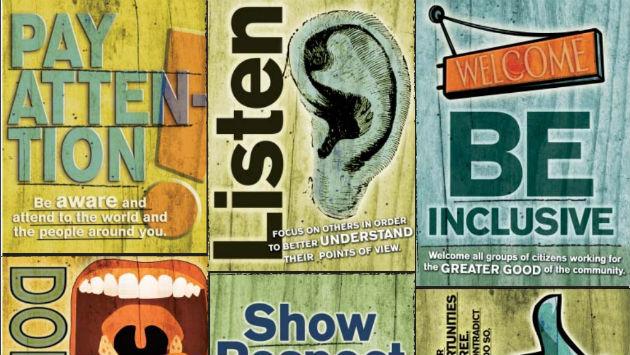 Evanston aldermen are scheduled tonight to explore options for improving the tone of debate around public issues in the community.

After a late-night episode last month in which one alderman resorted to vulgarities in criticizing another in City Councl debate, the Rules Committee tonight is scheduled to discuss City Council conduct during meetings.

Beyond that, they’re also scheduled, at the request of Alderman Melissa Wynne, 3rd Ward, to discuss a project developed more than a decade ago by the community foundation in Duluth, Minnesota, called “Speak Your Peace,” which attempts to build civic engagement through respectful discourse.

That project, revisited in a recent Wall Street Journal article, identifies nine principles for all participants to follow in debating public issues:

A video explaining the Speak Your Peace project in Duluth.

The aldermen are also scheduled to discuss setting an end time for Council meetings. Aldermen have frequently complained that their ability to think clearly declines when meetings last into the early morning hours and that the late-night meetings also discourage participation by the public.

According to a staff memo, of the last eight City Council meetings, four lasted longer than three hours and three of those ran longer than four hours, with one — where the breakdown in civility occured — not ending until around 1:30 a.m.

The staff memo proposes adopting an ordinance that would have Council meetings end by 11 p.m.

The memo notes that Oak Park, where village board meetings start at 7:30 p.m., sets a goal of having meetings end by 9:30 p.m. with a deadline for ending the meeting at 10 p.m.

It also notes several California communities that set end times. One requires a majority vote to continue for a half hour beyond that, and a unanimous vote to go even later.