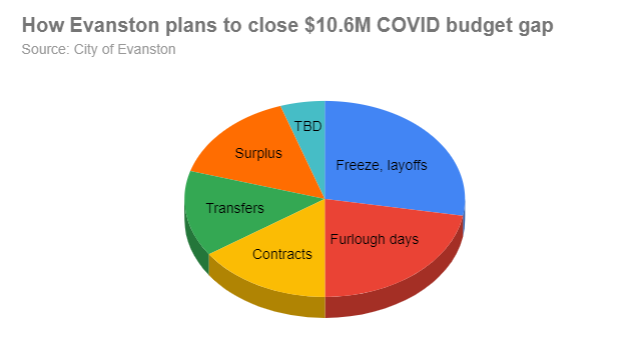 Evanston aldermen Tuesday are scheduled to get an update from city staff on efforts to close a projected $10.6 million budget cap created by the COVID-19 pandemic.

Details of the plan are contained in a memo to aldermen from Chief Financial Officer Hitesh Desai.

It lists a mix of actions that have already been implemented along with others that are still subject to negotiation. And it leaves a gap of about $543,000 that doesn’t have savings identified to cover it.

About 28% of the savings, more than $2.9 million, is expected to come from temporary layoffs and a freeze on filling vacant positions.

Another 22%. nearly $2.4 million, is planned to be achieved by having existing employees take 10 unpaid furlough days this year. Some of those savings are still subject to further talks with the city’s employee unions.

The city expects to achieve another 15% of the savings, or more than $1.6 million, by renegotiating some service contracts and making other non-payroll expense reductions. Those include scaling back this year’s Dutch Elm disease inoculation program and renegotiating a contract to manage the city’s parking garages.

Desai plans to close another 15% of the gap by eliminating a budgeted $1.6 million surplus in the general fund and 14% more, or $1.5 million, by reducing planned transfers from the general fund to the insurance, debt service and equipment replacement funds. Those moves will have the effect of shifting financial pain into the next city budget year.

Some activists are planning to push the aldermen to reverse the cut to the elm tree injection program. They dispute the position of city staff that postponing the treatment would result in the loss of only a handful of the prized trees.

Desai says, given uncertainty about the future course of the pandemic, there still is potential that the budget gap could end up being substantially larger than the $10.6 million now projected.

The virtual City Council meeting is scheduled for 5 p.m. Tuesday and will be available online. Persons wishing to make public comments can register here.