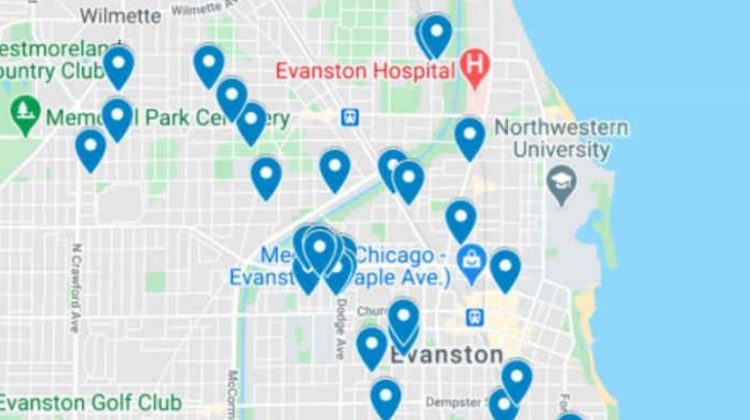 All but a handful of the 35 potential tiny home sites identified in Evanston are located north of Dempster Street.

The commission vote came after the advocate for the proposal, Andrew Gallimore, presented a map showing 35 small lots in the city that potentially could provide locations for such structures.

The lots on the map are all smaller than 3,300 square feet in size and average 2,887 square feet. All but a handful of them are located north of Dempster Street, with the largest numbers in the 5th and 6th wards.

While technically considered buildable lots, current zoning regulations make it essentially impossible to build a dwelling unit on lots of that size.

The proposed zoning text amendment would define a micro dwelling unit as a house with a ground floor area of 500 square feet or less entirely surrounded by open space on the same lot.

However it would require that the home be “permanently affixed to a foundation” and specify that “a mobile home or recreational vehicle shall not be considered a micro-dwelling unit.”

Many tiny homes are built on mobile home chassis, and it appears they would have to lose their mobility to qualify for use in Evanston under the proposed rules.

The zoning changes would reduce the side and rear lot size requirements to just three feet, to make it easier to fit the buildings on a small lot and impose a maximum building height of 28 feet. The micro dwelling units would be permitted in all residential zones in the city.

A tiny home plan that needed variations from the proposed rules would be treated as a special use request under the zoning code.

The tiny homes proposal is part of a broader set of proposals being considered as ways to encourage more affordable housing in the city.

It had been approved by the Plan Commission’s Zoning Committee in November. The concept drew support from 65% of readers voting in a recent Evanston Now survey on affordable housing concepts.

It is expected to be on the Planning and Development Committee and City Council agendas sometime in February.