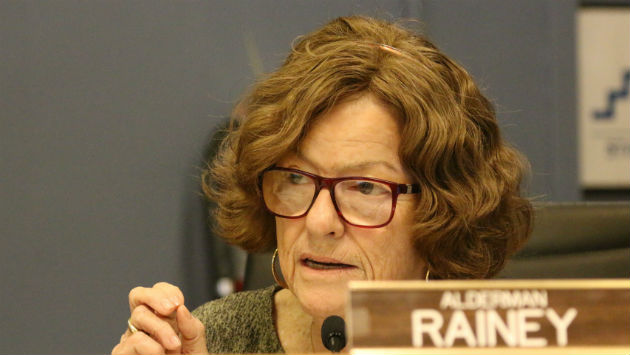 Evanston aldermen hope to sort out next steps in their search for a new city manager at a Rules Committee meeting next Monday.

At Monday night’s City Council meeting, the aldermen retreated from a plan pushed by Mayor Steve Hagerty to drop a scheduled nationwide search and select Interim City Manager Erika Storlie for the job.

That pullback came after Storlie said she was fine with the idea of going through the search process.

Alderman Ann Rainey, 8th Ward, called for moving the discussion to the Rules Committee and said that’s where the issues around the search should have been addressed in the first place.

Although the city code specifies that the City Council selects the city manager, the protesters insisted that letting residents meet with finalists after a nationwide search would ensure democracy and allow them to get the manager they wanted.

The protest was organized by OPAL, the Organization for Positive Action and Leadership, whose CEO is Alderman Cicely Fleming, 9th Ward.

A nationwide search doesn’t guarantee that residents will get to see a pool of candidates for the job before the selection is made.

In the search for a new District 65 school superintendent last fall, one of two finalists withdrew before planned community meetings could be held. The other finalist, Devon Horton, was appointed by the board without any complaints from OPAL.

In addition to restarting the search process that was stalled by the onset of the COVID-19 pandemic, aldermen Monday may attempt to resolve a conflict between the City Code and the City Council Rules over the process for appointing and removing a city manager.

The city code says the city manager is appointed by the City Council, presumably by a simple majority vote, and says the manager can be removed by a majority vote. Another code provision specifies that the mayor only has a vote to break a tie or in other limited circumstances.

But the City Council Rules specify that it takes “a two-thirds vote of the Council (seven (7) votes)” to appoint or remove the city manager.

Since a two-thirds vote of nine aldermen would be only six votes, that appears to suggest that the mayor is intended to vote on the appointment or removal of the manager.

But that amendment leaves unclear whether the mayor would be able to vote on the removal.

At Monday’s meeting Rainey also sharply criticized what she described as personal attacks on Storlie by opponents of her selection as manager.

A public letter from the OPAL board had accused Storlie of having “a limited racial equity lens.”

Rainey said Storlie is “a brilliant woman” who “is doing a magnificent job of getting us through” the pandemic. She accused Storlie opponents of “gay bashing” and urges resident to “please, don’t be hurtful” in their comments.