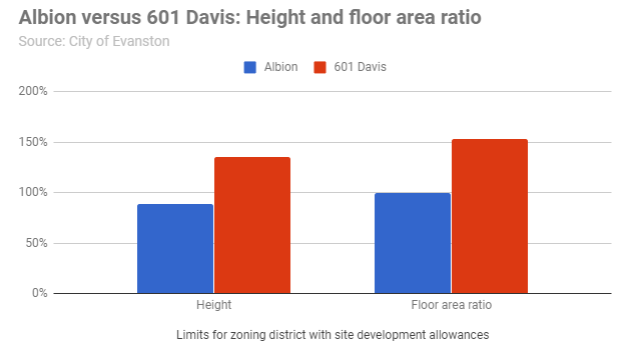 Evanston aldermen tonight are scheduled to discuss plans for a 33-story high-rise apartment building at 601 Davis St. that asks for far more in variations from city zoning limits than a project the aldermen approved last fall.

Compared to the Albion Residental development on Sherman Avenue, which was approved by a bare 5-4 margin, the plan from Vermilion Development for 601 Davis asks for much more height and density.

After a number of modifications, the Albion project came in at 89 percent of the 185 foot maximum height permited for planned developments with site development allowances in its D4 zone. 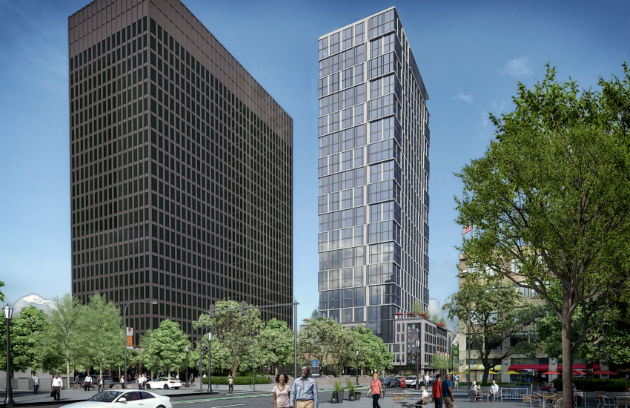 A rendering of the proposed 601 Davis high-rise, with the existing 1603 Orrington tower in the foreground.

Vermilion is asking for 136 percent of the maximum 260 foot height permitted with site development allowances in its D3 zone. 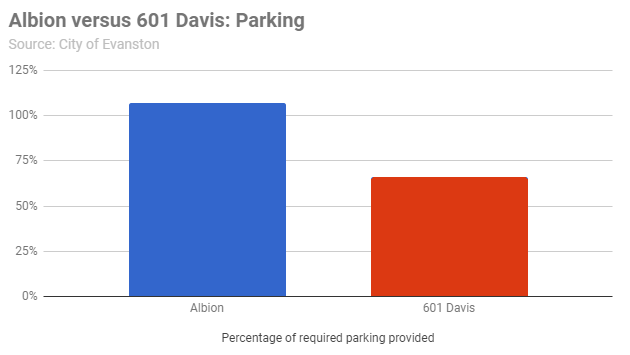 The approved version of the Albion plan called for providing 7 percent more than the 187 parking spaces called for under the zoning code. By contrast, Vermilion is seeking to win approval while offering 34 percent less than the 267 spaces the zoning code would call for — although Vermilion recently offered to negotiate with the city to lease additional parking in the Church Street garage.

And because two of the allowances Vermilion seeks exceed the maximum that can be approved by a simple council majority, the project will need favorable votes from two-thirds of the aldermen to win approval.

The project is scheduled for review by the Planning and Development Committee tonight. Assuming the committee votes to advance the proposal to the full City Council, a final vote likely would come at the Feb. 12 City Council meeting.