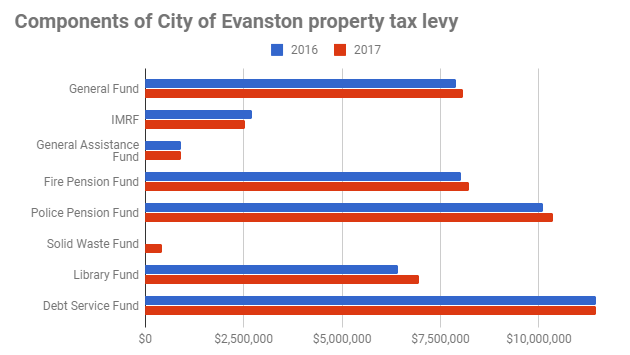 Evanston aldermen are scheduled to vote Monday on ordinances that will result in an increase of 2.95 percent in the city portion of the property tax levy for next year.

As proposed the total property tax levy would rise from $47.5 million to $48.9 million.

The largest percentage increase would be in the library fund — which would grow 8.6 percent to $6.96 million.

There would be increases of over two percent in the general fund and the police and fire pension funds, while the Illinois Municipal Retirement Fund tax would decrease by 6.3 percent.

The budget also includes a new solid waste fund for next year, with a first-year- levy of $418,367.

The aldermen Monday are also scheduled to adopt a resolution approving next year’s city budget, which calls for spending a total of $336 million, including interfund transfers. That’s an increase of 8.8 percent over this year’s spending level. The increase is due largely to capital spending for renovation of the main library and to build a new Robert Crown Center.

The budget includes nearly $3 million in spending reductions compared to what would have been required to continue existing programs unchanged into the new year.