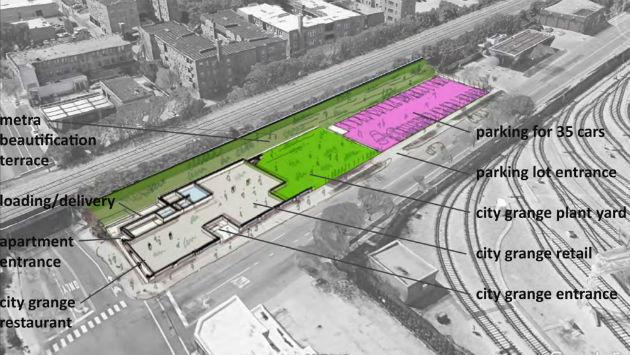 Evanston aldermen tonight are scheduled to vote on spending nearly $3 million in city funds toward a $7.8 million project to redevelop the blighted stretch of Chicago Avenue just north of Howard Street.

The latest version of the project calls for building a five story residential building with 24 apartments, including nine affordable units, along with a ground floor City Grange garden center and parking for 35 cars.

The developer is seeking $1.96 million in funding from the city’s Howard Ridge tax increment financing district and a $1 million grant from the city’s affordable housing fund.

Under the plan the city would also sell the city parking lot at the corner of Howard and Chicago to the developer, David Brown of Harrington Brown LLC, for its appraised value of $240,000 and credit the developer for the estimated $110,000 cost of environmental cleanup at the former gas station site.

The project was first reviewed publicly at the June 28 meeting of the Economic Development Committee. At that time the proposal was for a seven-story building with a total of 30 apartment units, of which 10 would be affordable.

Joy plans to seek $300,000 in Community Development Block Grant funding and a five-year, $20,000 a year sales tax revenue sharing agreement with the city.

The proposed development site, sandwiched between the Metra tracks and the CTA’s Howard Street yard, has been described by Alderman Ann Rainey, whose 8th Ward includes the property, as “by far the ugliest corner in the entire city.” She said at the EDC meeting that the project would be “an absolute savior” for the area.