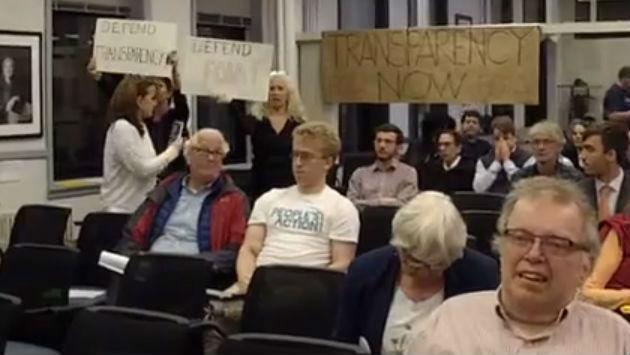 Evanston aldermen Monday are again scheduled to take action on resolutions that would limit the size of signs and how they are displayed at City Council meetings and that would also bar people from “phoning in” public comments.

At last Monday’s Council meeting, aldermen voted to hold the resolution on comments to have staff add language to let disabled people have alternatives to appearing in person — including having their written comments read at the meeting by someone else.

And the aldermen voted to hold the resolution about signs to have some revisions made to its language.

As originally drafted, that resolution would have added the following language to the City Council’s rules:

6.10 Persons attending the meeting may hold a sign that is 11 X 17 in size; banners or signs that are larger than the stated size will be permitted. The sign may not block the view of other members of the public and cannot be affixed to the walls, windows, or other glass.

The new language reads as follows:

6.10 Persons attending the meeting may hold a sign that is no greater than 8 ½ X 11’’ in size. Signs that are larger than the stated size will not be permitted. The sign may not block the view of other members of the public and cannot be affixed to anything within the Council Chambers, including but not limited to the walls, windows, podium, or other glass.

The limits on signs were suggested after aldermen complained that signs displayed during recent Council meetings had blocked the view of people in the audience trying to follow what was going on at the meeting.

The rules were developed in part based on similar rules adopted in Boulder, Colorado.

The image above, from a Boulder City Council meeting in May, indicates limiting signs to an 8.5-by-11-inch size hasn’t deterred residents there from showing up with signs and holding them up to express their views.