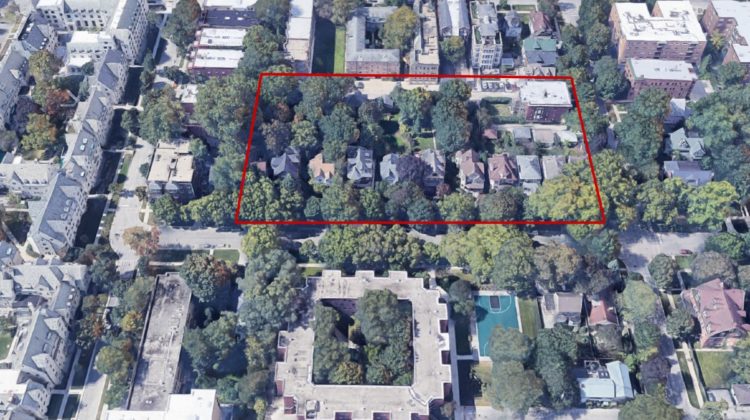 The area proposed for downzoning is outlined in red on this image from Google Maps.

Evanston aldermen are scheduled to vote Tuesday on a proposal, rejected by the Plan Commission, that would downzone most of the west side of the 1900 block of Orrington Avenue from R4a to R1.

Owners of half of the dozen properties that would be affected by the change have signed a petition favoring it. They say they fear the encroachment of student housing onto the block.

But owners of some of the other properties involved have hired an attorney to fight the change.

The block is in the Northeast Historic District and any conversion of a home to multifamily use would require special use permit approval under the existing zoning, but such a conversion would be completely barred if the zoning change were adopted.

The properties that would be affected run from 1910 to 1946 on Orrington and also include a multi-family apartment building around the corner at 714-716 Foster St.

In addition to the apartment building, one of the homes is currently a two-unit building and another is a licensed rooming house.

Opponents of the change note that it would turn those three properties into nonconforming uses along with several properties on the block that don’t meet the minimum 7,200 square-foot lot size requirement for the R1 district.

The block is for the most part surrounded by higher density multi-family and university uses — except to the north where R1 zoning stretches for several blocks on Orrington.

City staff told the Plan Commission that the block had been designated for higher density uses at least since the 1960s and was downzoned to its existing R4a designation in 2005.

The commission voted 5-2 to reject the proposed change with most members apparently convinced it was not necessary.

The switch would also run against a current trend in city zoning policy toward allowing greater density as a strategy to increase the affordability of housing in Evanston.