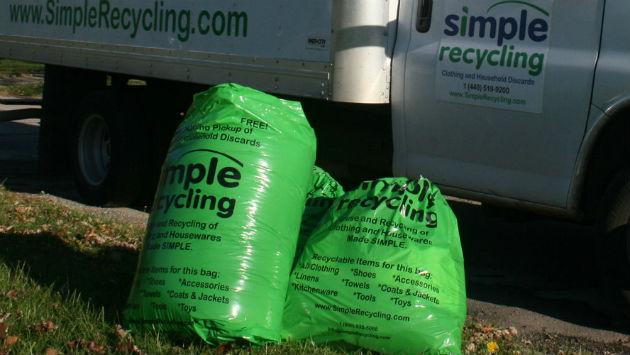 Evanston aldermen Monday are scheduled to approve a contract with a private firm to provide curbside recycling of clothing and a variety of other items not part of the current city-run recycling program.

Ohio-based Simple Recycling started offering its service last summer in Elgin and last month in Skokie and Lincolnwood, and also has operations in Michigan and Texas.

Public Works Director Dave Stoneback, in a memo to aldermen, says the five-year contract would let residents of single-family homes and apartment buildings with up to five units “recycle a multitude of materials on a weekly basis.”

The “soft recyclables” concept, Stoneback says, includes items that weigh less than 50 pounds, so they can be carried by a single operator of the recycling truck.

The emphasis is on clothing — but also includes everything from jewelry and toys to small appliances and electronic equipment.

Garbage, hazardous waste, large furniture and appliances and any item heavier than 50 pounds are among things excluded from the program. It also will not serve commercial clients.

Residents would be able to put out the recyclables in plastic bags provided by the company next to their existing trash cans on their usual trash pickup days.

Simple Recycling founder Adam Winfield says about 85 percent of clothing and other household textiles now ends up in landfills and that they make up 6 to 10 percent of the total residential waste stream.

Some of the clothing Simple Recycling collects is sold to local thrift stores, but most is shipped overseas for reuse. That practice has come under criticism in some African countries where it is blamed for stifling local textile production.

The program would operate at no cost to the city, and the city would earn a penny per pound fee on items collected. Stoneback says that amount is not likely to add up to much, but “the program has the potential to divert a large amount of material from the landfill,” which would reduce landfill fees the city now pays.

A company video explaining how the service operates