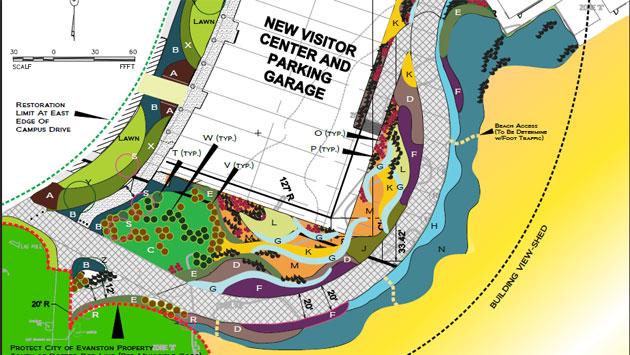 Evanston aldermen tonight are scheduled to vote on leasing a half-acre parcel of lakefront land to Northwestern University to provide a fire lane for a planned new visitor center on the campus.

The leased land would also provide a new connection between city- and university-owned bicycle and pedestrian paths along the lakefront.

The aldermen last month overruled the city's Preservation Commission and concluded on a 6-2 vote that the visitor center project was not inconsistent with the architectural character of the campus.

Opponents of the project have argued that the lease amounts to a give-away of city land to the university.

City officials counter, in a memo to aldermen, that the university will make more than $250,000 worth of improvements in the public right of way as part of the project, as well as paying over $14,500 for a one-year construction lease and nearly $174,000 in tree replacement fees to be used for additional plantings along the lakefront.

The memo also asserts that any extension of the lease beyond its initial 25-year term would be negotiated for a lease fee of no less than the city's standard easement fee of $0.50 per square foot, or over $10,000 per year for the entire parcel.

Top: A detail from a landscaping plan for the visitor center project. The city land to be leased for the fire lane is located to the south of the building.