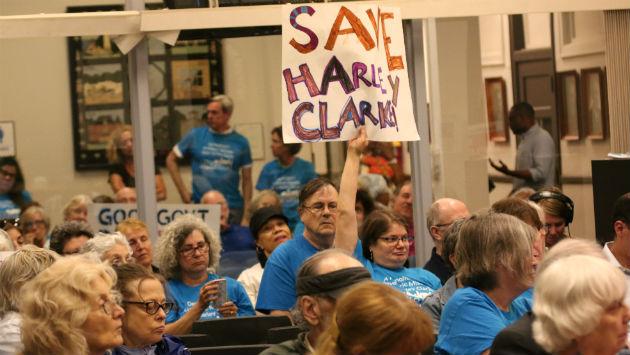 Evanston aldermen voted 6-3 Monday night to learn more about the likely cost of demolishing the Harley Clarke mansion and to negotiate an agreement with the Evanston Lighthouse Dunes group to cover the cost.

Alderman Judy Fiske, 1st Ward, said the city needs more information about the demolition option. ‘It’s important to find out through negotiation exactly what the scope of the work will be.

Fiske said “there didn’t used to be a park on the lake north of downtown.” Then the city gradually acquired three large private properties north of the Grosse Point lighthouse as they became available.

The Harley Clarke mansion, then owned by the Sigma Chi national fraternity, was bought by the city for parkland, she said, not for the house on the property.

“Now we have an opportunity at this site to really restore the lakefront — and that is historic preservation,” she added.

Alderman Don Wilson, 4th Ward, said the Evanston Lakehouse and Gardens group, which wants to lease the mansion from the city hadn’t delivered on what it promised in responding the the city’s request for proposals.

In the RFP they promised to quickly raise $4.8 million, Wilson said, but by the time the lease was submitted to the City Council, the initial fundraising promise had shrunk to $500,000.

But despite that, Wilson said, he felt a up or down vote on a demolition process “seems premature.”

Alderman Cicely Fleming, 9th Ward, said she’s “very concerned about not leaving the taxpayers on the hook” for the cost of the mansion.

“The city doesn’t have a use for the building,” Fleming said. “I don’t think a need has been shown for the building. And we can’t make a decision about what to do without getting more information.”