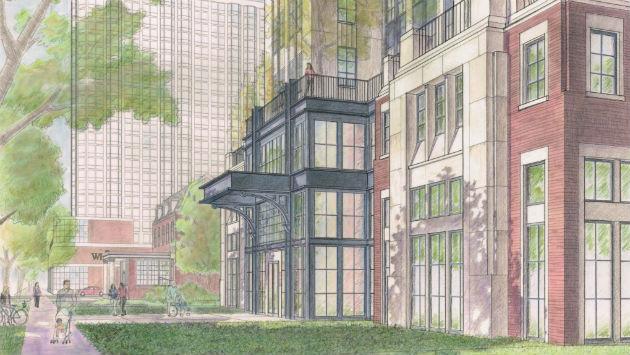 Faced with opposition from the historically-minded not-for-profit owners of adjacent properties, they flip-flopped on a plan they’d previously backed to sell the city-owned library parking lot at 1714-1720 Chicago Ave. for redevelopment.

The 6-2 vote came even after the would-be developer had brought on local architect Paul Janicki, who gave the proposed structure a classic design resembling an office building that might have been constructed a century ago.

During public comment seven people spoke in opposition to the project including Virginia Beatty who suggested that the city could realize more revenue by becoming a destination city for historic tourism than it would from redeveloping the parking lot.

Comparing Evanston to Oak Park, she seemed to suggest that temperance tourism to the former home of Frances Willard on the block might compete with architectural tourism to the west suburban community’s many Frank Lloyd Wright-designed homes.

The Frances Willard site in Evanston is now open to visitors for three hours a week on Sundays.

The developers also cut the price they were willing to pay the city for the property from $5 million to $4 million.

The rejection came on a vote to authorized the city manager to negotiate the sale of the property. That measure had been introduced on a 5-0 vote at the Administration and Public Works Committee meeting last week and then approved for introduction on the consent agenda at the full City Council meeting later that evening.

Some aldermen who voted against the project indicated they might favor a different development plan for the site.

Alderman Mark Tendam, 6th Ward, suggested the development might somehow be moved back on the lot and could incorporate a portion of the alley.