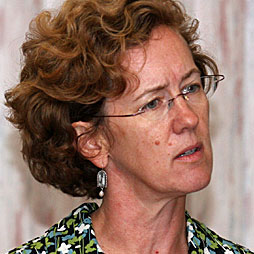 Alderman Jane Grover, 7th Ward, raised the issue at a recent City Council session, suggesting the title should be changed from "alderman" to "council member."

Grover said she favors switching to what she said would be a gender-neutral term.

The City Council has had female members for at least a few decades and currently six of the nine aldermen are women.

The practice in Evanston, as it is in Chicago, has been to use the title "alderman" for all members of the City Council — although occasionally a visitor to the council chamber will stumble over whether a female member should be addressed as "alderwoman" instead

That seems to happen about as often as the aldermen are addressed as "trustees" by someone more familiar with speaking to the village boards in other towns, rather than the City Council here.

Practices about what to call the elected members of the local legislative body vary widely in different communities.

Milwaukee has it both ways. Those elected to the City Council are referred to collectively as "council members" but their individual titles are "alderman" or "alderwoman."

If Google is your guide to popularity, "council member," with over 18 million citations, is more popular than "alderman," with fewer than 8 million.

New York City uses "council member." So does Los Angeles, although in LA it's spelled as one word — "councilmember"

"Councillor," with over 14 million citations, and an additional 4 million for the alternate spelling "councilor" is especially popular in England and other English-speaking countries other than the United States, and might give us an added air of sophistication, but then it could be confused with its homophone, "counselor," an alternative name for an attorney.

Boston is a major U.S. city where the term "councillor" is in use — although the city website is inconsistent about the spelling.

Of course, in an era of tight budgets, the discussion will inevitably also include consideration about whether, if a change is made, existing stationary should be used up or disposed of, and how much it will cost to make new name plates for the council chamber with the updated titles.