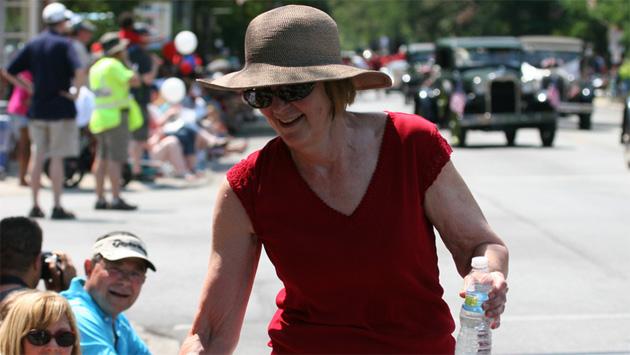 They turned down a suggestion from city staff to ride snow plows down Central Street as a way to mark the city's battle against the record snowfall last winter.

Alderman Ann Rainey, 8th Ward, said she hoped the aldermen would be able to get an earlier position in the parade than they did last year.

Having to stand in the assembly area for marchers "for two hours or an hour and a half in 80, 90 or 100 degree weather — It's just wrong," Rainey said.

Alderman Mark Tendam, 6th Ward, said he understands that other elected officials — with districts that encompass multiple towns — want to be toward the end of the Evanston parade so they can also march in other events earlier in the day.

"But for us," Tendam said, "it means never seeing the parade. It's important that we be up front so we can see what's going on — so we can turn around and walk back and see the parade."

Alderman Jane Grover, 7th Ward, said she planned to ride a bike, and "I'm going to pull Alderman Tendam behind my bike."

Alderman Don Wilson, 4th Ward, said he planned to ride a bike as well, but Mayor Elizabeth Tisdahl said she planned to walk again this year.

Rainey said she hoped to share a quadricycle with Alderman Delores Holmes, 5th Ward. Her use of that vehicle has turned into a hallmark of the Bike the Ridge event each fall.