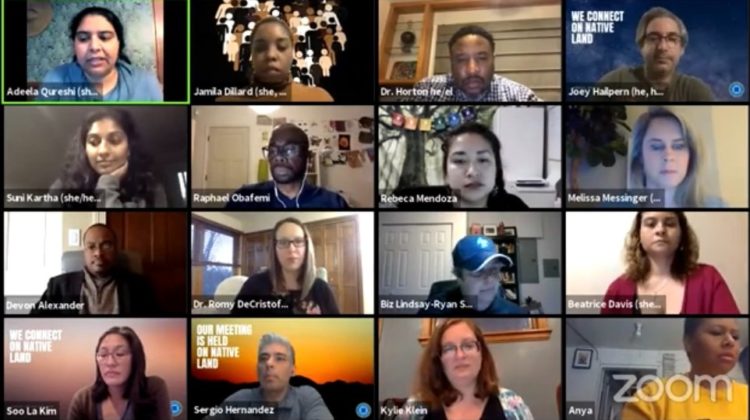 Some school board members displayed "Native Land" graphics on their Zoom screens during Monday's board meeting.

Meetings of governmental bodies in Evanston typically do not open with a prayer or the Pledge of Allegiance.

But soon, every board and committee meeting in Evanston/Skokie School District 65 may open with a 506-word recitation of the wrongs inflicted upon Native Americans and enslaved people in the United States.

Termed a “Land Acknowledgement,” the statement, according to its authors at the district, serves to “recognize the enduring relationship between Indigenous Peoples and the land stolen from them.”

If it is read at meetings, attendees will hear a statement which starts “This is the land of the Council of the Three Fires, the Potawatomi, Ojibwe, and Odawa.”

The statement also talks of “cultural genocide” as well as the taking of indigenous lands “under settler colonialism through genocidal actions.”

Board President Anya Tanyavutti introduced the measure Monday night, saying the resolution “continues the important equity journey we’ve been on.” She said sending children to a school system which does not fully recognize the wrongs “feels like sending them into a colonizing den.”

Land acknowledgements have been introduced in some other communities and organizations, although they are not widespread.

Northwestern University has one on its website saying the university “sits on the original homelands of the Council of Three Fires.” There is also historical information, although there is no requirement at NU to read a statement before meetings.

Eleanor Holmes Norton, the non-voting Congressional representative from the District of Columbia, introduced a resolution in the House of Representatives last year, encouraging state and local governments to use such acknowledgements “whether verbal or written” before public or ceremonial events.

The District 65 resolution uses some of the same wording as the Norton measure, but the key group advocating for land acknowledgements around the country is something called the U.S Department of Arts and Culture. That may sound like a government agency, but it’s not.

Instead, the group describes itself as “a people-powered department,” a grassroots organization of activists with the long-term goal of “nothing short of a paradigm shift from a consumer to a creator culture, from ‘me’ to ‘we,’ to a society rooted in equity, empathy and interconnectedness.”

The organization’s website offers an “Honor Native Land Virtual Resource Pack,” which includes virtual backgrounds for online meetings. Some District 65 board members had logos behind them during Monday’s meeting that match ones offered by the group, though no one on the Board indicated where the logos came from or if the District had received any information from the group.

The District 65 statement also links Evanston to the wrongdoings, saying “We acknowledge Evanston and its founder John Evans are tied to the massacre of Cheyenne and Arapaho people,” due to frontier development which led to Evans’ wealth.

The massacre was at Sand Creek, Colorado, in 1864. Evans was territorial governor at the time. About 150 Native Americans were killed by federal army troops.

District 65’s effort to directly link Evanston to the Sand Creek massacre may be taking some historical license. John Evans was among the founders of NU and of the community, but he was not the single founder of the town which was subsequently named for him. Both Northwestern and Evanston were established before the Sand Creek massacre, and at least part of Evans’ wealth was accumulated prior to 1864.

A Northwestern study several years ago concluded, “Evans did not profit from the Sand Creek massacre. In fact, it cost him both politically and financially,” as he had to resign as territorial governor.

The study also found “no evidence” that Evans helped plan the massacre or knew of it in advance.

However, the scholars also said Evans was part of a flawed federal Indian policy, and his conduct after the massacre, by refusing to acknowledge or even criticize the killings, “reveals a deep moral failure that warrants condemnation.” Evans “displayed complete indifference to the suffering” of the Cheyennes and Arapahos, the study found.

It also determined that Evans did profit from general government policies that favored development over the rights of Native people, and while it is difficult to quantify his financial contributions to NU as a result, “such a connection existed.”

The University, the scholars stated, has ignored Evans’ “significant moral failures before and after Sand Creek,” an oversight that should be corrected.

Whatever the significance of John Evans in this story, other land acknowledgement statements typically have focused only on Indigenous/Native American people. The District 65 statement goes a step further by adding enslaved African-Americans.

“The genocidal acts of settler colonialism,” the statement says, “extended to peoples of Africa and their enslaved descendants,” and it describes an ongoing pattern of “State-sanctioned violence against Black people” which the document says continues to this day.

The board had a panel of six educators and local parents discussing these issues as part of the Monday night meeting. One of the panelists, Dave Stovall, a professor of Black Studies at the University of Illinois at Chicago, said including Indigenous and Black individuals together in the message “highlights those folks who have been the target of white supremacy.”

The statement as currently written wraps up by saying “We honor those that have come before us as leaders and stewards, by whom the land of Illinois was cared for and acknowledged.” The document urges those hearing the message to learn more about the many Native people still in our area via the Chicago American Indian Community Collaborative, and about local Black history through the Shorefront Legacy Center.

While there was strong support on both the panel and the school board for the land acknowledgement, there were a few concerns.

Panel member Juanita Montoya, who identified as Indigenous, wondered how lessons would be incorporated into the classroom, and “not just read a sheet before a meeting which is required to do.”

And board member Rebeca Mendoza also wondered how the acknowledgement would advance student knowledge. “For me,” Mendoza said,” the reading of this is targeted towards adults attending these meetings.”

She added “the redundancy of doing it at every single meeting and committee meeting loses a sense of sacredness” for what should be a meaningful look at history.

The District 65 Board votes later this month on whether to mandate reading the land acknowledgement at all sessions and committee meetings.

Using a normal rate, each reading would take about three-and-a-half minutes. The “Pledge of Allegiance” takes 15 seconds.

The District 65 resolution and the text of the Land Acknowledgment