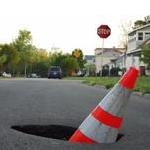 The City of Evanston, noting that April is pothole season, released details Tuesday of its procedure for dealing with potholes.

At the same time, it advised citizens to report potholes by dialing 3-1-1 or by filling out a short form on the city’s website.

Potholes and pavement failures are formed by the freeze-thaw cycle. When water seeps into cracks in the pavement and freezes, it expands and creates larger cracks. With the weight and movement of traffic, the cracks degrade the street surface, forming potholes over time.

The city uses UPM to fill the holes, which is a permanent cold mix patch material for potholes and asphalt repairs. UPM can be used in either wet or dry potholes and is designed to perform in any weather condition.

While the city has filled many more potholes then just those reported by residents, it does not count individual potholes filled. Rather, they count the amount, in tons of UPM they use as filler.

The city’s Streets and Sanitation Division dispatches as many as four crews of three workers at a time to fill potholes. The filling of potholes is prioritized by volume of traffic or service level of the street.  In other words, main thoroughfares are filled first, then side streets and then dead-end streets.

Additionally, the city prioritizes 3-1-1 service requests into the first group. It is important to note that city crews do not wait for a 3-1-1 request to fill potholes; they proactively search and fill them.

When a crew finds a pothole, the first step is to remove as much loose material as possible, creating a hole with firm paved edges.

The next step is to actually fill the hole with UPM a little higher than the surrounding asphalt.

The final step is to roll or tap the asphalt into the hole to bring the material to the same grade as the surrounding asphalt.

The majority of 3-1-1 requests to fill potholes are completed within a few business days, or so they say.