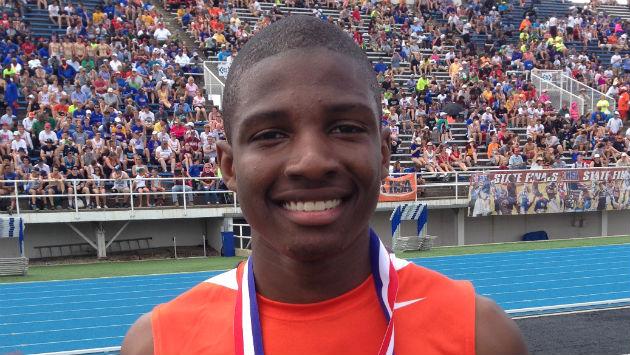 By his own admission, Roland Amarteifio entered the Evanston track program as a freshman “at 5-foot-3, barely 100 pounds and with no speed.”
He left Saturday as a champion — almost.

A late surge by William Session of Belleville East in the final stages of the race forced Amarteifio to settle for a runnerup medal in the 300-meter intermediate hurdles Saturday at the Illinois High School Association Class 3A state finals at Eastern Illinois University in Charleston.

The Evanston senior also placed 3rd in the 110-meter high hurdles, accounting for most of the Wildkits’ 20 team points that earned them a tie for 12th place in the team standings with Galesburg. East St. Louis Senior captured the team crown with 54 points.

After earning two state medals — a 3rd and a 6th — as a junior, Amarteifio graduates as one of the most successful hurdlers ever to wear an ETHS uniform.

He set school records both on Friday (14.05 seconds in the 110 highs) and Saturday (37.63 in the 300 intermediates) but saw his unbeaten season in the longer race end when Session pulled off a winning effort of 37.46.

Amarteifio had his sights set on taking down the Belleville East standout all spring and did beat him head-to-head when fate placed the two runners in the same preliminary heat on Friday. The ETHS runner was clocked in 38.24 to 38.95 for Session in that showdown.

Saturday, it was Session’s turn. He took advantage of his lane placement — Lane 3 — to sneak up on Amarteifio, who was leading until the final hurdle competing in Lane 6.

“I wish I’d lined up next to him, because I had no clue that he was coming like that. I didn’t see him,” Amarteifio said. “Session has always been a big-meet competitor and, after I beat him Friday I knew he’d run harder today. Then he just came out of nowhere on me in Lane 3. I thought I was winning the race and when I finally saw him I thought, oh no, don’t do this to me.

“I did get a PR today and I’m happy with that. I’ll take 2nd. I’m just glad I got a medal that’s not bronze, because I was getting tired of collecting bronze medals. Before we came down here I just wanted to give everything I have to Evanston track and field, no matter what the results. So I couldn’t be disappointed now. That’s the hardest I’ve ever run that 300 race. Usually I go hard for the first part of the race and then I relax around the (first) curve, but I didn’t do that today. I knew if I wanted a good medal I had to push through and keep going, like Coach (Vernard) Harris and Coach (Laurel) Wilson have been telling me all year.”

Amarteifio’s accomplishments are even more impressive considering the caliber of competition he was up against in his two trips to Charleston. In the high hurdles Saturday, he lost to Edwardsville junior Travis Anderson (13.71) and Session (13.72) and both times would have broken the existing state record except for a wind-at-their-backs that exceeded the 2 mile per hour legal limit when it comes to determining record performances.

Amarteifio was clocked in 14.13, just off his prelim time.

“I give a lot of credit to the coaching staff and the way they trained me since I came in as a freshman,” said the slender senior. “The only thing I could do was work hard and grow. I give it all up to the coaching staff because they built me up, and they made me believe in myself going up against the best in the State.”

“Roland had a great meet today,” said ETHS head coach Don Michelin, noting the senior’s 49.65 leadoff leg for the 7th place 1600-meter relay team. “He wasn’t even our No. 1 hurdler as a freshman, and now he owns both school records. He fell in love with the hurdles, and when you love something like that, you do a great job of preparing for it. We’ll miss his wins — you could always put us down for 20 points right away with two wins for him in the hurdles — and we’ll definitely miss his leadership.”

Amarteifio combined with juniors Brian Daniels, Michael Henry and Brad Garron for a time of 3:19.66 in the 1600 relay that was well off the pace the same foursome set Friday during qualifying, when they put together the fourth fastest time of 3:17.95. East St. Louis posted the fastest time Saturday, in 3:15.35.
Garron’s stumble out of the starting blocks in the 400-meter finals — 24 hours after he lowered his own school record to 47.72 — left him back in the pack in 8th place in 49.73. Garron had owned the best statewide time coming out of the sectional competition and also posted the fastest prelim time.

His inexperience in an individual race at the state level may have been his undoing.

“Right before the start, he (the starter) all of a sudden said stand up and I moved because I thought we were ready to go,” Garron explained. “After that happened I just had a horrible, horrible start, the worst start I’ve had all year. I messed up mentally because I just couldn’t relax after that first time.

“Getting that (record) time yesterday gave me a lot of confidence in the way I was running the race, because the way I run is unique to my own body. But yesterday when we were sitting in the tent the other guys said to me you’re a heat leader, so why be nervous? I said it doesn’t matter because everyone runs faster at State.”

Garron was also a victim of some intervention by Mother Nature. Meet officials, worried about the threat of bad weather on both days, accelerated the meet schedule instead of sticking to established starting times for each event, and that didn’t leave any room for rest for Garron between the open 400, open 200 and the 1600 relay.

So he dropped out of the open 200 even though that had been his best race prior to this spring.

“My brother and my Dad were arguing with me about dropping out of the 200,” Garron said. “But after the 400 I said to myself that I didn’t have enough left to run those other two races. As I called Coach Michelin (on his cellphone), coach was already on his way over to the tent to scratch me.”

“This was a very rough week for us, and it made me really have to appreciate what we did last year (tie for 2nd place in the team standings) even more,” said Michelin. “We’re young, and it showed today. I thought Brad had a chance to win the 400 and I thought they might call the race back because it wasn’t a fair start for him for the first 10 meters. But they chose not to.

“When they went with the rolling (time) schedule, he really didn’t have a chance to try to run that 200, too. That’s still on the table next year if that schedule isn’t a pattern down here. That was absolutely his worst start of the year, and I feel for the guy. He did get a lane (in the finals) and that’s huge. He put himself in a position to win, but it just didn’t work out.”

The Wildkits weren’t able to produce any points in the field events as senior Jonathan Connerly-Bey (shot put), junior Morgan Brown (discus) and sophomore Jonathan Wilburn (triple jump) were all unable to survive the preliminary qualifying.

Connerly-Bey’s best throw in the shot was 46 feet, 6.5 inches and Brown only mustered one legal toss out of three in the discus at 123 feet.  Wilburn’s best 43-10.5, coming one week after he topped 46 feet for the first time in his short career.