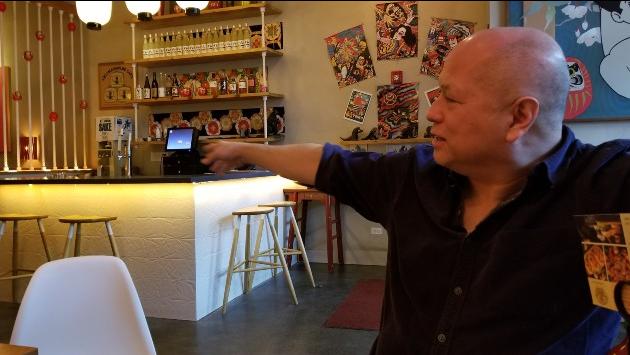 After 29 years in Evanston, Lulu’s restaurant on Davis Street is about to go “virtual,” owner Dan Kelch says, with its physical location replaced by a new American tavern concept.

In an interview with Evanston Now, Kelch said much of the Lulu’s menu of Asian dishes will still be available for delivery, catering and carryout, but that it’s time to switch the restaurant space to a concept that’s expected to lead to more bar sales.

Kelch says that with rising expenses across the board, and especially for real estate taxes, there’s a need to increase the average check from diners.

The average check at Taco Diablo and Five & Dime, the two other restaurants that share the building at 1026 Davis St. with Lulu’s, “is substantially higher,” Kelch says.

At Lulu’s, Kelch said, the typical drink is hot tea.

While cocktails at Taco Diablo are mostly made with Tequila or Mezcal, the new tavern’s drink menu will emphasize bourbon and gin drinks, Kelch says, some classics and some more modern ones.

So the small bar at Lulu’s will be substantially expanded in the redesign. Beyond that, he says, there’ll be cozy semi-circular tufted Naugahyde booths to soften up the look of the space.

The new food menu will feature burgers, sandwiches, grilled fish and maybe ribs, Kelch says. “Not high end, but we want it to be nice — good, solid food.”

Kelch says the existing Lulu’s space will close by the middle of February, and he hopes to open with the new tavern concept by the end of March.

He hasn’t yet settled on a name for the new restaurant.

This time of year nobody is using the outdoor deck in the upstairs Five & Dime space, but Kelch says the two indoor rooms upstairs — the main bar and the game room — continue to be heavily booked for private events that range from bridal showers to corporate recruiting events for students at Northwestern’s Kellogg School of Management.

“It’s a unique space,” says Kelch’s business partner Marty Cless, “You kind of have free rein with your own separate entertainment options — to play ping pong and foosball.”

Cless says they’re also happy with their purchase of the former Studio Media building next door, at the corner of Davis Street and Oak Avenue.

“It took a little while, but we’ve found the right tenants.” That building now houses expanded space for a local chiropracter in the rear and a Philz Coffee up front that Cless says “is bringing people to the corner from morning to night.”