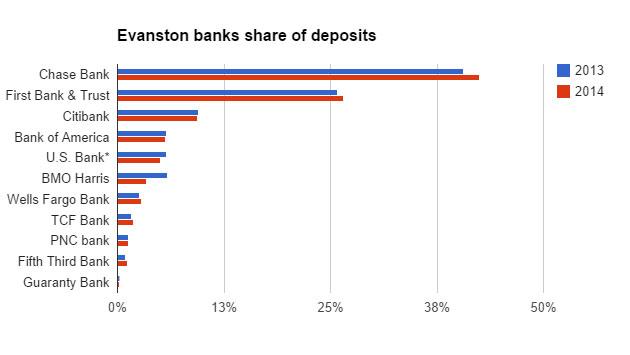 Evanston residents increased their bank deposits by 5.3 percent this year, and most of the extra cash ended up at the city's two largest banks.

Chase Bank, with five branches in Evanston, increased its share of the banking market here from 41 percent last year to 43 percent this year and a total of $887 million in deposits, according to data released by the Federal Deposit Insurance Corporation today.

Locally owned First Bank & Trust increased its share from 26 to 27 percent, with a total of $553 million in deposits. They've been the top two banks in Evanston for more than a decade.

Citibank and Bank of America maintained their positions in the ranking with 9 percent and 6 percent of deposits respectively.

The big losers in the data, which record deposits as of June 30 each year, were U.S. Bank, which took over the Citizens Bank branches here, and fell from a 6 to a 5 percent market share, and BMO Harris, whose share dropped from 6 percent to 3 percent.

The other five banks in the market showed only fractional changes in their market positions.

Across the Chicago metro area. Chase, BMO Harris and Bank of America hold the top three slots, in that order.

The overall increase in savings in Evanston was smaller than for the metro area as a whole, where bank deposits increased 8 percent.