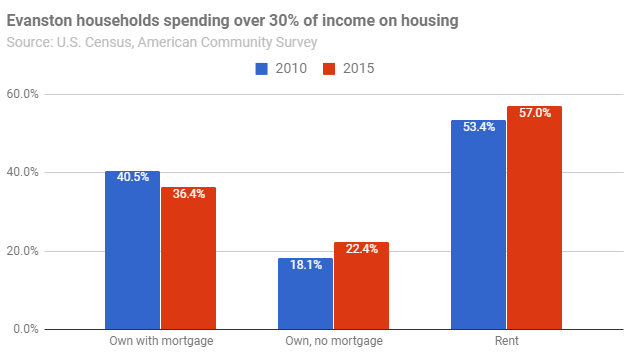 With Evanston aldermen scheduled Monday to review the city’s affordable housing programs, here’s a look at how housing affordability has changed over the past several years.

Spending more than 30 percent of income on housing is considered by many advocates to be an indication of being over-burdened by housing costs, although households with below average transportation costs may be be able to comfortably carry somewhat higher housing costs.

Data from the American Community Survey conducted by the U.S. Census Bureau shows that the share of Evanston residents who spend more than 30 percent of their income on housing changed between 2010 and 2015 — declining for homeowners with mortgages, but increasing for homowners without mortgages and for renters.

The changes were fairly modest, and all fall within the margin of error for the survey.

For comparison here’s a look at the same data for our neighbor to the west, Skokie. 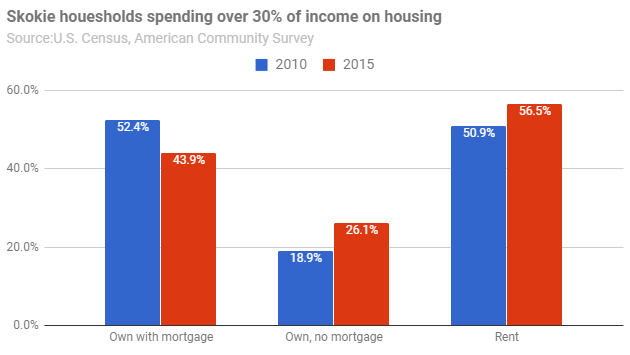 Skokie showed an even sharper drop in the share of owners of mortgaged homes who spent more than 30 percent of their income on housing — and sharper increases in the share of cost burdened mortgage-free homeowners and renters.

The changes in Skokie for both groups of homeowners exceeded the survey’s margin of error but the change for renters did not.

In Evanston, the survey indicates there was a shift between 2010 and 2015 away from ownership of a mortgaged home and toward being a renter that was big enough to exceed he survey’s margin of error. The survey says that in 2015 in Evanston 1,400 more households were renters than had rented in 2010, while 1,521 fewer households had mortgaged homes.

The number of homeowners here without mortgages increased by 467 during the period, but that increase wasn’t quite large enough to exceed the margin of error.

There were similar but smaller changes in Skokie.