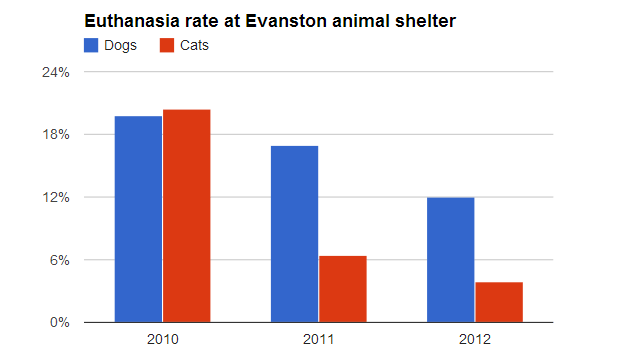 Some unhappy animal shelter volunteers will get to air their complaints before a Evanston City Council committee tonight.

The Human Services Committee is scheduled to consider a proposal from City Manager Wally Bobkiewicz to extend the city's agreement under which the volunteer Community Animal Rescue Effort largely runs operations at the shelter on Oakton Street.

The unhappy volunteers argue that too high a percentage of dogs brought to the shelter end up being euthanized.

CARE leaders, in turn, complain that the city has failed to move on plans developed nearly a decade ago to expand the shelter to provide better conditions for animals housed there.

A memo from Bobkiewicz says that when CARE leaders met with city officials in November, "both parties expressed frustrations with the other on specific issues related to the operation of the shelter."

But they agreed to come up with a one year extension of the agreement, to run through 2014, that will be up for discussion tonight.

Bobkiewicz says if operational issues can be resolved "to the satisfaction of both parties" this year, then a new agreement could be drafted to resume the shelter expansion project and to continue to have CARE operate the shelter in the future.

Reports from two consultants who studied the shelter's operation last year recommend a number of steps the shelter could take to improve adoption rates — from testing dogs for behavioral problems sooner after they arrive at the shelter to more quickly getting their pictures posted on the CARE website.

The chart above shows the percentage of all live dogs and cats taken to the shelter who were eventually euthanized.