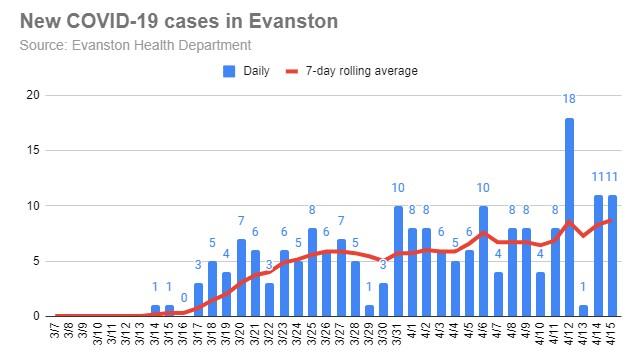 Evanston reported 11 new COVID-19 cases for the second day in a row today, raising the city’s total to 197. Across Illinois there were 1,346 new cases, raising the statewide the total to 24,593.

The state reported 80 more deaths for a total of 948. Thirty-three of those deaths occurred in Chicago, where the death count now stands at 361. Evanston reported no new COVID-19 deaths today. Its total remains at five.

The equivalent chart for COVID-19 cases statewide is shown below.

Gov. J.B. Pritzker at his news conference this afternoon said that — despite what some projections show — he doubts that once the peak in cases is reached that cases would then fall off as quickly as they initially rose. Instead, he suggested, the decline in cases is likely to be much more gradual.

The governor also said that the pandemic will blow a multi-billion dollar hole in the state budget with just two-and-a-half months left in the state’s fiscal year, and he said all states, not just Illinois, will need additional aid from the federal government to weather the financial storm.

In addition to estimating a $2.7 billion shortfall for the current fiscal year, he said next year’s budget gap will be $6.2 billion if voters adopt a graduated sate income tax this fall, and $7.4 billion if they don’t.