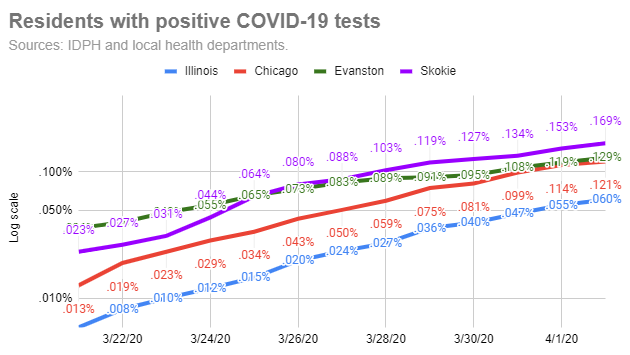 For the second day in a row, Evanston recorded 8 new confirmed COVID-19 cases today, bringing the total here to 97. The statewide count rose by 715 to a total of  7,695.

There were 192 new cases in Chicago, bringing that city’s total to 3,279. Skokie reported six new cases today for a total of 52.

At his news conference this afternoon Gov. J.B. Pritzker said the first 500 beds at the temporary hospital at McCormick Place are scheduled to open tomorrow — just five days after construction began and that the state has identified a site for a fourth emergency hospital to respond to the increased need for hospital beds.

Illinois Public Health Director Dr. Ngozi Ezike announced that the state today received its first shipment of 15 of Abbott Laboratories new test devices that make it possible to detect a COVID-19 case in as little as five minutes.

Pritzker said he didn’t want to make a decision about whether to keep Illinois schools closed beyond April 30 until much later this month, when, hopefully, the peak of coronavirus cases may have passed.

Ezike also stressed that a diagnosis of COVID-19 is “not a death sentence.” She said that in one survey in Illinois 50% of those surveyed reported that they’d recovered just seven days after receiving their diagnosis, and she predicted that that number would be much larger if the same group was surveyed another week later.

Pritzker continued his criticism of President Trump’s response to the pandemic, saying it will “go down in history as a profound failure of our national government.”

An internal company memo says Gallagher was diagnosed several weeks ago after experiencing a mild fever. He was not hospitalized and he’s since been cleared to return to work.

The memo says patient volumes continue to rise at NorthShore, but its facilities are not yet at capacity.