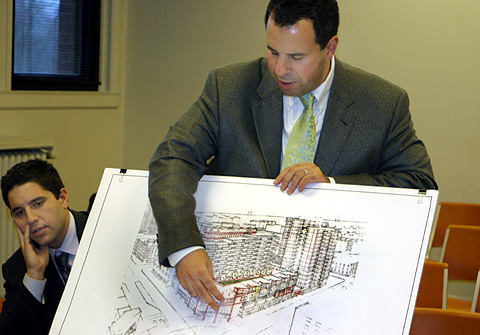 Developer Robert King is planning a 14-story rental apartment, townhouse condo and retail complex at 1890 Maple Ave. If approved by the city, it would become the first major new downtown rental development in several years.

Senior Designer Randy Deutsch of FitzGerald Associates Architects points to the two-story retail space at the front of the proposed development The site, at the corner of Maple Avenue and Emerson Street, is just east of Mr. King's planned 18-story Carroll Place condo complex at 1881 Oak Ave. that won City Council approval on a 6-3 vote July 10. Construction on that project hasn't begun yet, but it's scheduled to be completed by October 2008.

The development team Wednesday told the Site Plan and Appearance Review Committee that the project would have 152 rental apartments, eight townhouse condominiums, 40,000 square feet of retail space and 313 off-street parking spaces. Mr. King said 44 of the parking spaces would be leased from the city in the Maple Avenue garage. The existing building on the site leases 87 parking spaces in the city garage. Community Development Director James Wolinski said he found the new project "overwhelming" and questioned whether there is a market for its planned two-story retail stores. Architect Patrick Fitzgerald said that two-story retail has been successful in Evanston, citing the Urban Outfitters clothing store and Barnes and Noble book store on Church Street. The developers say that under the property's 'RP' zoning the city zoning code permits buildings 85 feet tall, and provides planned developments a bonus of an extra 10 feet for each level of enclosed parking. The proposal would have three levels of parking. The zoning code says that the city can give additional height bonuses to planned developments in the research park area. It doesn't specify a numeric limit, but says the height increase shall be "the minimum necessary to achieve the desired building density as referenced in the research park master plan." The developers estimate they would need a 30 foot height bonus to build the 14 story project. Alderman Lionel Jean-Baptiste, who represents the 2nd Ward, where the project is located, said he wants to get more information about the proposal and hear the reaction of neighbors before deciding whether to support it. Ald. Jean-Baptiste also offered non-committal responses in the early stages of the 1881 Oak project, but ultimately worked to secure its approval. 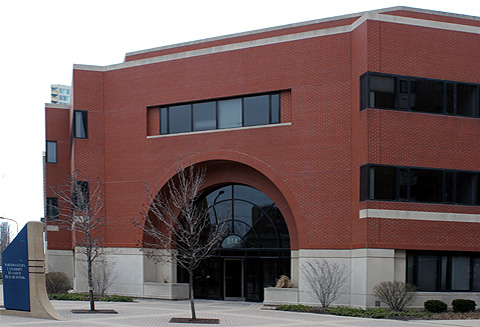 The existing building at 1890 Maple Ave. The Maple Avenue site is currently occupied by a vacant three story office building that county assessor records indicate is only 15 years old. Earlier this year Preservation Commission members included it in a list of possible new downtown landmarks, but it failed to score highly in a comparative ranking of the landmark prospects and the commission dropped it from further consideration. Several months ago the Downtown Plan Subcommittee of the Plan Commission designated the site as part of a "transitional" area that it said should have lower building heights than those permitted in the downtown core. But the subcommittee has yet to define exactly what limits it wants in the transitional zones, and no zoning changes for the area have been approved by the full Plan Commission or the City Council.