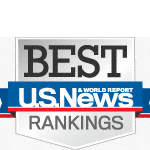 Evanston Township High School ranks in the top 2 percent of high schools in the United States, according to the U. S. News & World Report.

The local school was one of only 19 high schools in Ilinois, including selective magnet schools, to earn "gold   medal" honors in the annual magazine's evaluation of more than 21,000 public high schools in 49 states and the District of Columbia.

Superintendent Eric Witherspoon noted that this was the second national publication within a week to rank ETHS in the top 2 percent of the nation's schools. Earlier, the Washington Post released a similar ranking.