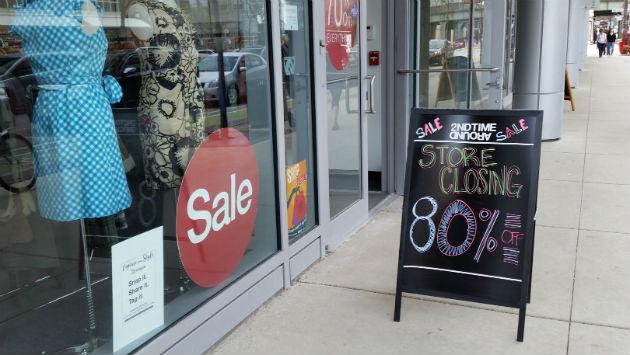 The retail clothing shop 2nd Time Around at 900 Church St. in downtown Evanston is closing, adding yet another set of darkened windows to the busy commercial street

Since this time last year 10 businesses have closed along the five blocks of Church Street from Oak Avenue to Chicago Avenue.

But the news hasn’t been all bad. Two of the spaces that went vacant already have new tenants.

Fidelity Investments has moved into the space at 808 Church St. that The Levi’s Store vacated last September.

And owners of the restaurant Viet Nom Nom, are planning to open in the space at 618-1/2 Church St. that had been the Funky Monk until last summer.

During the past 12 months three new businesses have opened in spaces last occupied more than a year ago, including The Barn, a restaurant in a building at the rear of 1016 Church that had been vacant for decades.

Long-term vacancies on the street include the small office building at 1020 Church St. and the storefront at 715 Church that also provides access to the long-vacant second floor retail space in what was built in 1950 as the Lytton’s department store.

But the seven-story office building at 1007 Church St. got a new owner in January who paid $26.8 million for a building that sold for just $9.6 million two-and-a-half years earlier.