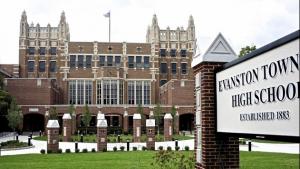 For what it’s worth, Evanston Township High School won another top ranking of schools by a national magazine. This time it was U.S. News and World Report, which claims that the local school is the 15th best in Illinois and the 456th best in the country.

A month ago, the Washington Post ranked ETHS as 17th in the state and 601st in the nation.

By comparison, New Trier High School in Winnetka was regarded by U.S. News as the 21st in Illinois and 541st in the United States.

ETHS earned a gold medal ranking for 2015 from U.S. News and improved its spot on the national list, moving up to 456 from 585 out of more than 21,150 public high schools on the list. ETHS also improved its state ranking, advancing from the 21st to the 15th spot this year.

In explaining its methodology, the publication said it is “based on these key principles: that a great high school must serve all of its students well, not just those who are college bound, and that it must be able to produce measurable academic outcomes to show it is successfully educating its student body across a range of performance indicators.”

The rankings are calculated using a three-step methodology, the publication explains:

“ Step 1: The first step determined whether each school's students were performing better than statistically expected for students in their state.

“Step 3: Schools that made it through the first two steps became eligible to be judged nationally on the final step – college-readiness performance – using Advanced Placement or International Baccalaureate test data as the benchmarks for success, depending on which program was largest at the school.”

A full explanation of its methodology is contained on the publication’s website.

ETHS moves up a notch in Washington Post rankings