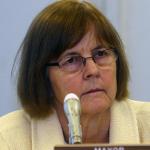 In a wide-ranging discussion this week about how to respond to economic distress among residents, Evanston City Council members focused mainly on job training and job creation efforts.

At the strategic planning meeting, Mayor Elizabeth Tisdahl said, "In terms of getting people out of poverty, jobs are the best tool to use."

She said when she checked on the travel time, it took her an hour and 42 minutes to get from Evanston to Oakton's main campus in Des Plaines by bus.

Tisdahl said Evanston residents now form only eight percent of Oakton's student body, while providing 16 percent of its tax base.

Evanston Township High School "has a wonderful career pathways program," the mayor said, "but school officials are afraid to encourage students to join it becauses they don't want to be accused of tracking black or brown students into vocational programs."

The community college "is making a few moves to do better" — including teaching classes in the nationally certified auto repair shop at ETHS, the mayor said, "but we still have a ways to go."

She said Oakton also teaches classes at St. Francis Hospital in Evanston geared to jobs the hospital needs to fill, "and the hospital employs graduates as quickly as it can get them."

While many of the city's own efforts have focused on "at risk youths," Tisdahl said the community college programs would be of benefit to people of any age who needed to reinvent themselves for a new career.

The number of Evanston residents living in poverty has increased over the past decade in Evanston — but not as fast as in most other suburban communities around Chicago.

U.S. Census Bureau figures also show that the inflation-adjusted median income of Evanston households has decreaed 10 percent over the past decade — while median rents fell less than 4 percent.

Tisdahl said she hoped the new large rental developments going up in town — particularly the one just begun on Emerson Street — will ease some demand for the existing rental supply and result in lower prices for some apartments.

Alderman Ann Rainey, 8th Ward, added that with the housing market crisis of recent years, many people have shifted to rental housing and that added demand has driven rents up.

With the dedication Wednesday of the first phase of the Emerson Square development, the city is nearing the end of a burst of affordable housing construction and rehabilitation projects driven by a $18.1 million one-time federal grant.

City officials estimate that roughly 10 percent of Evanston residents are "at risk" of homelessness, but existing city programs provide new housing for no more than 45 households a year.

Before the housing market meltdown, the City Council imposed an affordable housing set aside fee on new condo projects and single family home teardowns. But that tax doesn't apply to rental developments — the only type of construction that's revived recently.

In 2006 voters defeated a referendum that would have increased the real estate transfer tax to fund affordable housing projects.