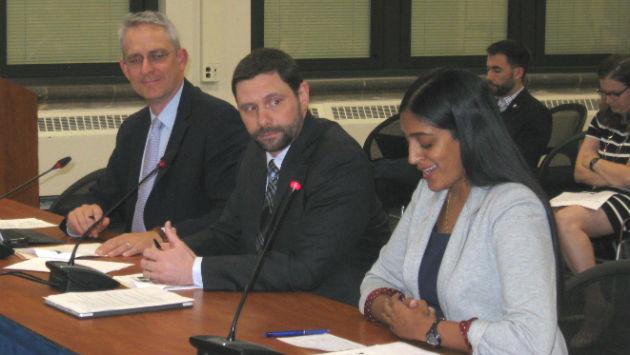 “We are at an all-time high in student participation and student success,” declared Pete Bavis, assistant superintendent for curriculum and instruction, in his annual Advanced Placement report to the school’s Board of Education.

Last spring, he said, a record 988 students took one or more AP exams and 685 of them scored a 3 or higher on one or more of the AP exams, which by law is enough to qualify for college credit at any public university or public community college in Illinois.

Bavis noted that scoring a 3 or higher on four AP exams “can provide a semester’s worth of credit, potentially saving students thousands of dollars in the total cost of attendance at an Illinois public university.”

Once regarded as a relatively exclusive domain of white students at ETHS, a great deal of effort has been made in recent years to encourage students of color to enroll in AP courses, with the school providing academic supports to help them succeed in that endeavor.

In his report, Bavis noted that this past spring, some 159 African American students took the exams, representing a 61 percent increase since 2012, and that 65 of those students earned scores of 3 or higher, which represented a 91 percent increase during that period.

Hispanic students also increased AP participation by 49 percent since 2012, with a 51 percent increase in those earning a 3 or higher on the exams.

Bavis noted research that indicated that even attempting an AP class increases a student’s academic trajectory.

“Researchers have found that students who earned an AP exam score of 2,” he said, “had better college performance and higher four-year graduation rates than students who didn’t take an AP course.”

“It shows we are not lowering our standards by pushing more students into AP classes,” he said.

Bavis’ written report to the board is available on the school’s website.