Architect Dan Coffey says the developers of a 37-story tower proposed to be constructed atop the landmark Hahn Building on Evanston’s Fountain Square block "are not opposed" to construction of a proposed 49-story tower on the adjacent 708 Church St. site. 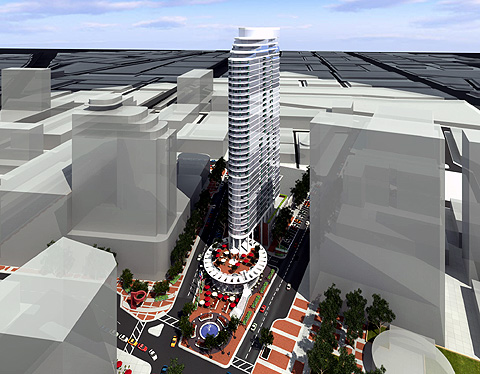 A rendering of the 37-story tower designed by Daniel P. Coffey & Associates.

Mr. Coffey told aldermen last night that the north-facing units in his design are oriented primarily on a 45 degree angle to either the northeast or southeast — reducing the impact of the adjacent tower on his project.

After a heated discussion, aldermen voted 7-2 not to go into executive session to discuss a possible sale or lease of land beneath the surface of Fountain Square for use as a parking garage for the development, or the developers’ proposal to have a portion of the restaurant at the south end of the site encroach on city land.

Alderman Steve Bernstein, 4th Ward, argued against listening to the developers’ presentation in a public meeting and moved to hold the executive session.

But Alderman Ann Rainey, 8th Ward, said that since the project had already been discussed at the site plan meeting, "that cat’s out of the bag, it’s already been publicly discussed" that the developer wants to acquire some rights to Fountain Square.