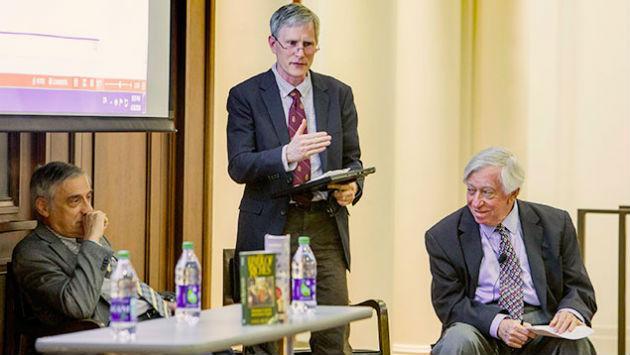 Two Northwestern University economics professors offered starkly contrasting views of America’s economic future this week in a debate on the Evanton campus billed as a “Clash of the Intellectual Titans.”

Robert J. Gordon, the Stanley G. Harris Professor of the Social Sciences and professor of economics in the Weinberg College of Arts and Sciences, supported the thesis of his recent best-selling book, “The Rise and Fall of American Growth,” by citing economic statistics that indicate the best years for growth in the United States are in the past.

Joel Mokyr, the Robert H. Strotz Professor of Arts and Sciences and professor of economics and history in Weinberg, countered that the best is yet to come, arguing that ground-breaking advances in science and technology will surpass previous innovations and generate growth.

The Tuesday night debate, “Resolved: America’s Best Years of Economic Growth Are Behind Us,” at Harris Hall was sponsored by the Northwestern Political Union and drew an audience of more than 200. Though the two had argued the issue well before Gordon’s latest book was published earlier this year, the event was their first public, face-to-face debate on campus.

Mark Witte, professor of instruction and director of undergraduate studies in economics in Weinberg, moderated the debate and helped direct questions from students in the audience after two rounds of remarks by Gordon and Mokyr.

Gordon’s thesis is that economic growth generated by previous technological innovations during the industrial revolution is so much greater than anything that lies ahead, while Mokyr argues that technology will continue to be a significant generator of economic growth far into the future.

He described the second industrial revolution from 1870 to 1970 as producing monumental changes to the way Americans worked and lived, and most were widely available by 1920. Electricity and indoor plumbing became universal; cars and airplanes replaced the horse and buggy; the telephone, radio, television and movies were invented, and advances in chemistry and medicine, such as antibiotics, marked crucial progress.

In contrast, the third revolution since 1970, which has focused on entertainment, information and communication technology, provided significant productivity gains during the 1980s and the dot-com era of the 1990s but has lost momentum and is no longer game-changing for business, Gordon observed.

“By 2005, this revolution in business practices is almost over, and it’s mainly a consumer revolution rather than a business revolution,” he added. “Everywhere I look, I see things standing still. I see offices using desktop computers and software, much as they did 10 or 15 years ago. In retail stores we’re checking out with bar code scanners, the same way we did before; shelves are still stocked by humans, not by robots; we still have people slicing meat and cheese behind the counter.”

Other signs that indicate America’s economic heyday is over, Gordon said, are that by World War II the average work week had shrunk from 60 hours to 40, but hasn’t changed since, and that “productivity growth in the last six years is as slow as it’s been in U.S. recorded history for that long a period.”

In addition, he added, the U.S. faces significant headwinds in the rising cost of college and soaring student debt; the mass retirement of Baby Boomers that will put a greater financial burden on fewer workers; inequality between rich and poor that is expanding, and growing government debt creating the tough options of either raising taxes or cutting Social Security and Medicare.

“Innovations are continuing, and I am emphatically not saying that technological change is over,” Gordon said, but those headwinds are “darkening the outlook for economic growth in the future.”

“The world is more pluralistic and competitive than ever. The likelihood that this competition will ever disappear in my view is vanishing. Most nations realize they have to keep up, or else they will fall behind in global competition,” Mokyr said.

“In today’s world, if something is invented, it is invented everywhere, because with globalization, knowledge spreads really fast,” he observed. “In the past, inventions could take decades, even centuries, to spread. Today, things move instantaneously, and that is a big difference.”

Moreover, scientific progress in the past decade has been “as exciting as ever,” and future developments will accelerate and “overcome all headwinds,” Mokyr said. He predicted that as technology improves the tools that scientists use for research, the result will be achievements in laser technology, medical science, genetic engineering and other areas that look out of reach today.

“The tools we have today make anything that we had even in 1950 look like clumsy toys by comparison,” he added.

One area that Mokyr cited as having great potential for innovation was 3-D printing, which he predicted will be a key part of the next industrial revolution.

“Basically you will have one in the home within a couple of decades and actually be able to produce the exact product you want to produce. Manufacturing will go back to the home, and it will be a revival of domestic industry,” he said.

Likewise, advances in healthcare and medicine may also drive growth as even human intelligence is predicted to increase, Mokyr said. He believes that acquiring a deeper understanding of the brain will enable better mental health treatment and new ways to address deterioration with age.

“Are we there? We’ve barely started scratching the surface.”