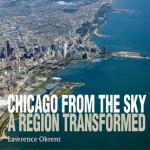 Evanston resident Lawrence Okrent, an urban planner and photographer, will give an illustrated presentation about his new book, “Chicago from the Sky: A Region Transformed,”  tonight at the Evanston History Center in the Dawes House, 225 Greenwood St.

The book describes the growth that occurred in the Chicago area from 1985 to 2010. Images depicting the dramatic evolution of Evanston’s downtown will also be presented.

The 240-page book includes 92 illustrated articles on subjects as diverse as the creation of the Museum Campus, the demise of a bygone era of public housing, the evolution of the city’s signature sports venues, and the revival of historic city neighborhoods, such as Chinatown, Wicker Park, and the Near South Side.

Suburban Chicago is covered, as well, with articles that dramatically illustrate the character of the change that has occurred, largely unnoticed, beyond the city limits.

The lecture will begin at 7 p.m. Admission is free to members of the Evanston History Center; non-member tickets are $10 each.