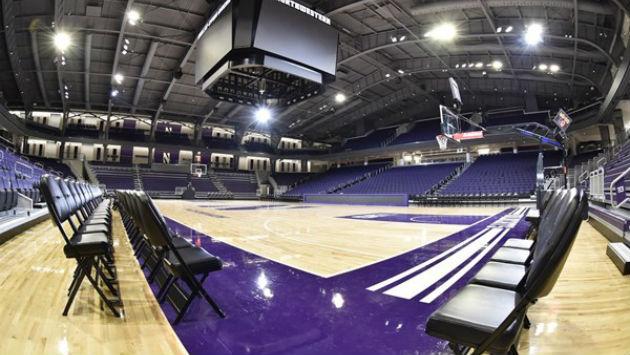 Evanston Plan Commission action on a zoning text amendment to permit a limited number of pro sports and entertainment events at Northwestern University’s Welsh-Ryan Arena was delayed Wednesday at the request of neighbors who object to the change.

The commission did reject arguments by neighbors that the change should be considered a map amendment rather than a text amendment.

Had the neighbors succeeded in that claim, the university would have had to restart the review process, because the zoning code, at 6-3-4-6, requires postal notification to neighbors of proposed map amendments, but not text amendments..

In general, text amendments change what uses are allowed under what conditions in an existing zone, while map amendments reassign a property from one zone to another.

The Plan Commission’s rules give opponents of a zoning proposal the right request one continuance of a hearing if they claim in writing that they need the extra time to gather information to rebut claims made at a hearing by the party seeking the change.

Several neighbors submitted paperwork at the meeting requesting extra time but without specifying what testimony they sought to rebut.

Plan Commission Chair Colby Lewis coached one of the opponents on how to add the appropriate wording to qualify for the delay, and with that paperwork revision, the commission voted to grant the postponement until the panel’s next meeting, at 7 p.m. on Wednesday, Aug. 28.

The zoning code, at 6-15-7-2, now permits essentially unlimited use of the arena, stadium and adjacent sports facilities for the university’s own athletic and cultural events as well as high school sports and school commencement activities.

It also allows what it describes as “temporary events.” Those now are limited to “community and cultural events of a nonprofit nature” and “amateur athletic events.”

Those events require individual approval from the city with attendance capped at 10,000 people. Up to seven events, each with a duration of up to five days could be permitted under the existing rules.

Mike Polisky, NU’s deputy director of athletics for external affairs, said the school has typically only hosted one temporary event annually in recent years and that those events have generally only lasted one day.

He said that while the university might find new events that could take place at other venues on the sports complex, its primary interest was in finding expanded uses for the recently renovated areana.

The changes would also include a sunset provision that would see them expire after two years unless the City Council voted to renew them.

Polisky said that with the reduced 7,000 spectator limit, he believes the university has adequate parking on site to handle all event attendees.

The zoning change has been recommended for approval by city staff. Once the Plan Commission makes a recommendation on whether to approve it, the proposal will go to City Council for a final determination.

The university is separately seeking city permission to expand options for liquor sales at Welsh-Ryan Arena, but that issue is not subject to Plan Commission review.