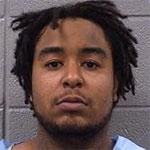 An armed felon arrested last year by Evanston police was sentenced in Skokie district court today to spend at least the next 10 years in prison for being an armed habitual criminal.

Blair Aikens, 28, whose most recent address was at 9301 Karlov in Skokie, but who previously lived in Evanston, was arrested on July 16 last year along with Antoine Hill in the 1800 block of Brown Avenue.

Police said each of the men was carrying a loaded 9mm handgun and that they believed the arrests likely headed off shooting incidents in the city.

Terms of the sentence require that Aikens spend at least 85 percent of the 12 years in prison due to the seriousness of the offense.

At the time of his arrest on the gun charge, Aikens was also arrested on a Pennsylvania warrant for delivery of cocaine.

Hill, who was sentenced to 18 years in prison in 2006 for the 2005 murder of Robert Gresham at The Keg, was out on parole at the time of his arrest last year. He's still awaiting trial on the 2013 charges.