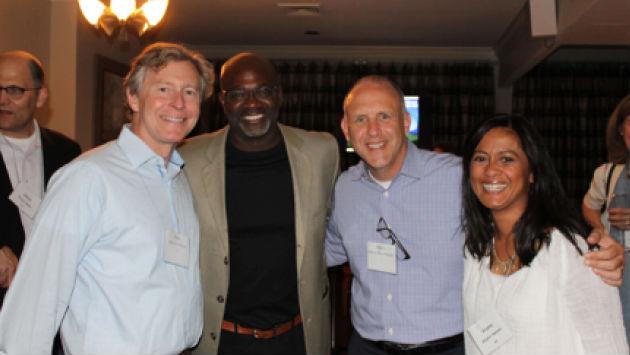 The event “was a huge success” said Daniel Stein, President of Friends of the Robert Crown Center. “We surpassed our $100,000 goal, putting us in position to finish construction without asking Evanston taxpayers to finance more than the original $39 million in bonds.”

An Evanston ordinance that stipulates that one percent of all public project costs be invested in public art has created a public art opportunity at the New Robert Crown Community Center. The Evanston Arts Council chose artist Blessing Hancock and is working to finalize the design of the interactive sculpture.

The mandate for $400,000 of public art is among the items that will be funded by FRCC’s $15 million stretch goal.

The Friends group last month delivered a $5 million check to the city for its first installment of funding for the Crown project.

The New Robert Crown Community Center project includes a new branch library where neighborhood children can receive tutoring and mentoring while expanding Internet access to families who don’t have it at home. In addition, the project will upgrade the childcare center, which provides pre-school and childcare for more than 100 Evanston families.

The center will also include two NHL size ice rinks, a gym double the size of the current one to provide both structured and drop-in activities, a running track, and Evanston’s first publicly available turf fields.

“Virtually no other center in the U.S. will provide all of these educational and recreational resources all in one place. There is literally something to strengthen the mind and the body of every Evanstonian,” Stein added.