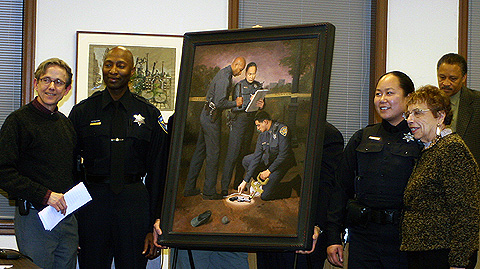 Three Evanston police officers are featured on the fourth and last in a series of painting presented to the City of Evanston by nationally recognized artist and Evanston resident Richard Halstead.

Three Evanston police officers are featured on the fourth and last in a series of painting presented to the City of Evanston by nationally recognized artist and Evanston resident Richard Halstead.

To represent Hispanics within his series, Jeremy Niemanâ€™s features were combined with a Hispanic friend of Halsteadâ€™s.

"I wanted the painting to imply a sense of tragedy and at the same time convey the dedication and determination of the police on the scene depicting their calm professionalism," the artist said.

Halsteadâ€™s prior paintings in the series portray a firefighter, an emergency medical technician and a forestry worker. City employees posed for each painting. All are on display on the second floor of the Evanston Civic Center, 2100 Ridge Ave.

"These people perform enormously important services for us, often under very difficult and dangerous circumstances. This was my way of recognizing that and saying how much all of us in Evanston appreciate what they do every day," Halstead said.

Halstead is a professional portrait artist who has painted portraits of Marshall Field V and Joseph Cardinal Bernardin, various corporate executives and university administrators and donors as well as family portraits.

His portrait of Cardinal Bernardin is in the National Portrait Gallery of the Smithsonian Institution in Washington, D.C., and his portrait of former Governor George Ryan hangs in the State Capitol in Springfield. Halsteadâ€™s studio is in the Noyes Cultural Arts Center, where he works and teaches.

Noyes Center tenants provide a portion of their rent in the form of service to the community.