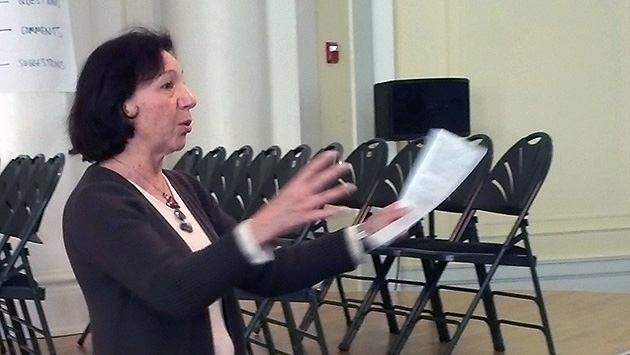 Arts advocates say their online survey and community meetings show a high level of interest in the arts in Evanston.

At presentations Tuesday at the Music Institute of Chicago and the Civic Center, the EvansArts group said just over half the 579 people who responded to the survey patronize some sort of arts event at least once a month and 38 percent are subscribers to at least one Evanston arts organization.

About half of those who responded to the survey described themselves as artists. 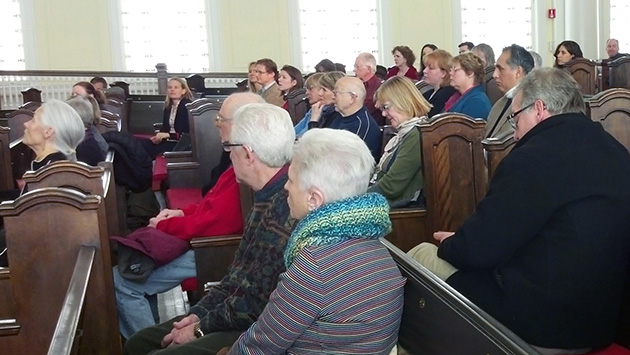 Top: Judy Kemp, who chairs the EvanstArts group is a former board chair of the Evanston Community Foundation and the Next Theatre. Above: About 50 people turned out for the presentation at the Music Institute of Chicago.

Perhaps unsurprisingly, the advocates think the city should spend more money to support the arts.

They also claim there is not enough awareness of arts offerings in the city and that problems like the high cost of parking and the expense of programs are deterrents to greater participation.

Nearly all the survey respondents say they also attend arts events in Chicago and about half travel to other suburbs to patronize the arts.

The EvansArts project is being funded by the city and the Evanston Community Foundation.

The group's preliminary plan for next steps calls for more coordination among arts groups and creation of a "central clearinghouse for funding" with "clear timelines and outcomes."

It suggests the city should play an active role in bringing groups together but should not implement the projects.

But at the same time it calls for creating a "cabinet-level position" in city government  to coordinate arts inclusion in budgeting and economic development activities and increasing city funding for artists.

It also suggests creating a low-profit limited liability company to creat arts spaces in the city and using affordable housing programs to meet the live/work space needs of artists.

A copy of the presentation from the meetings is expected to be posted later this week on the evanstarts.org website.