Long-standing plans to revive the corner of Church and Dodge are beginning to take shape with construction now well underway to convert an abandoned store into a performing arts center called Boocoo. 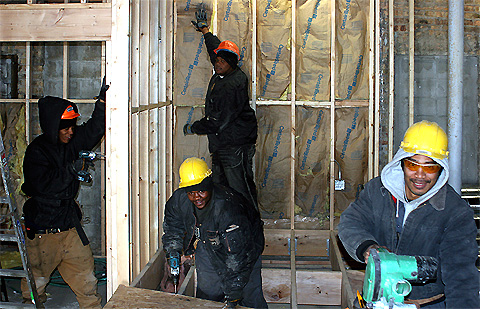 Alex Daniel, Jack Taylor, Terrel McCray and Jermaine Mills at work on what will be the Boocoo stage.Â

And the project is also providing an opportunity for nearly a dozen young neighborhood residents to learn construction trade skills.

Boocoo, an American variant spelling of the French word beaucoup, meaning "much" or "a lot," is also planned to offer exercise programs, a recording studioÂ and a cafe. It's scheduled to open about May 1.

Lonnie Wilson, the former Family Focus staff member who's a leader of Community Builders of Evanston, says the trainees are mostly high school dropouts who'd been unemployed or working dead-end, low-wage jobs before starting the program. Some, he says, had also been involved in illegal activities. 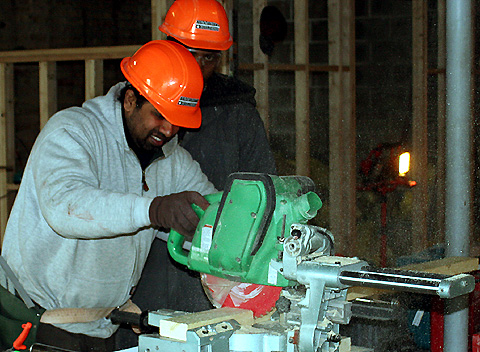 The building they're renovating, at 1823 Church St. once housed a gas station, grocery storeÂ and dollar store.

Delroy Mangal, who ran his own general contracting business before signing on with Community Builders to be its manager, says the young men started working with the group just a year ago, mostly doing demolition work.

"Gradually they built up different skill sets, and we figured out which trades the different members of the team seemed to have the most aptitude for, and most liked working on," Mr. Mangal says.

"Now that they've built up their skills, he added, "Some are at the point of doing formal studying for exams that would let them become licensed in the trades."

"Depending on the particular trade, the time line will be different, before they'd be able to start businesses on their own," he said, "for example, you have to have worked seven years as a journeyman before you can be licensed as a plumber."

"It's definitely more fun than school," one of the trainees said, "you get to move around and do things — you don't have to sit still."

Boocoo and Community Builders are both operations of the Enterprise Development Foundation.

The foundation, headquartered in Evanston, is headed by Daniel Cheifetz, who says the overall goal is to provide workforce development and life skills acquisition opportunities for young people in a wide variety of fields — whether it's in construction trades or the performing arts.

Ron Fleckman, is the president of Cyrus Homes, which is developing the Church Street Village town home project on the former Hines lumber yard at 1613 Church, two blocks east of the Boocoo site.

He says that he and Cyrus chairman Walter Kihm "started out very skeptical or cynical about Daniel's ideas, but we've have been very much won over as we've visited the work sites over time and have seen how successful they've been at teaching the skills." 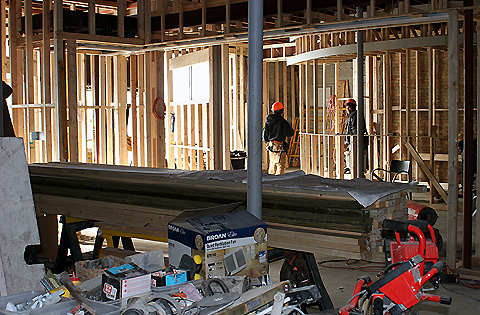 Workers stand on either side of whatÂ will becomeÂ Boocoo's curved cafe counter.

Cyrus has already hired Community Builders for some projects at Church Street Village and Mr. Fleckman says they plan to do more as the project progresses.

Mr. Cheifetz says there's long been concern that Evanston residents lose out on the opportunity to work on construction projects in town, but that the Community Builders project demonstrates that residents can acquire the necessary skills and be hired to do the work.