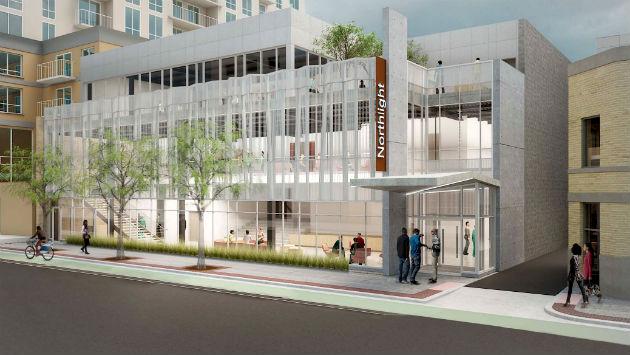 A rendering of Northlight Theatre's planned new home in Evanston. Plans for it have been put on hold by the pandemic.

The just-passed federal COVID-19 relief bill is “a long overdue package arriving just in the nick of time” for beleaguered theaters, concert venues and museums in Evanston and around the nation.

“When COVID hit,” Silberstein says, “it hit so hard and so fast that everybody hunkered down in their lifeboats,” but figured the crisis of canceled shows and exhibits would last about three months. But it’s not close to finished yet.

Before hitting those lifeboats, arts organizations sent out an “SOS,” which has finally been heard. In this case, “SOS” stands for “Save Our Stages,” a $15 billion component of the overall $900 billion COVID relief measure just approved by Congress and finally signed by President Donald Trump.

While who gets how much money is yet to be sorted out, Tim Evans, executive director of the Northlight Theatre, calls “Save Our Stages” a “lifeline for the arts and culture sector.”

“We’ve been dying out here,” Evans says. “None of us can operate.”

Founded 45 years ago in Evanston, Northlight has been based at the North Shore Center for the Performing Arts in Skokie for the past two decades. Northlight’s plans to move back to Evanston in a newly-designed facility are still in the works, but have been postponed due to the financial impact of the coronavirus pandemic. Groundbreaking is now targeted for 2023, a one-year delay.

Evans says Northlight has had to cancel more than 200 performances since mid-March, at a cost of more than $1 million in revenue. “We’ve cut expenses a dozen ways,” Evans says, with all 17 staff members taking pay cuts and furloughs. Northlight has also created virtual projects for school and community groups.

The City of Evanston says there are about 50 arts and cultural organizations in town, of various sizes.

Theo Ubique Cabaret, on Howard Street, is a small playhouse which might benefit from “SOS.” Spokesperson John Olson says the theater may qualify in a pool of money set aside for organizations with fewer than 50 employees, although the details have not been spelled out yet.

Financial challenges are not new for cultural organizations. In fact, Silberstein says, “it’s always an existential crisis for the arts,” with performers, theater operators, and museum curators often not knowing where funding will come from next.

So in a sense, he says, arts groups are as emotionally as ready as just about anyone to deal with hard times. “Learning to live with an improvisational and ensemble mindset,” is how he puts it.

Among the many hats he wears in the arts world, Silberstein is co-founder of HMS Media, a production company which specializes in video projects for various cultural and theater organizations. Silberstein says the “new normal” of a post-COVID reality may not kick in for theaters until Spring 2022, because many patrons will not attend until there has been widespread distribution of the COVID vaccine.

But he also says investing in the arts is a way to help bring the rest of the economy back to good health. “When communities like Evanston look at how to recover,” he says, having a new Northlight Theatre downtown will revitalize restaurants, and even increase parking revenue for the city.

While $15 billion is a huge amount of money, considering the number of potentially eligible organizations around the country, it won’t be a bonanza for anyone, just a lifeline.

Still, Northlight’s Evans says “finally the arts and cultural sector has gotten the attention of lawmakers.”

Silberstein puts it another way. Considering the multi-billion dollar impact of the arts in the United States, government assistance should be seen as an investment in the economy, and not as a bailout. “It shouldn’t be like the orphan in the play ‘Oliver!'” he says, with a hand out crying “Please sir, may I have some more?”