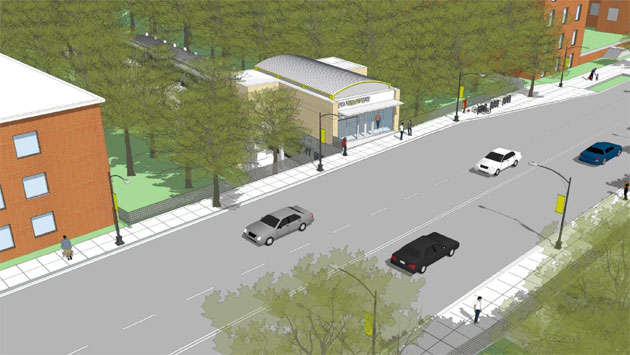 City officials say an engineering feasibility study has concluded that Asbury Avenue is the best location in Evanston for a new CTA Yellow Line station.

City Engineer Paul Schneider told about 30 people gathered at the Levy Center Tuesday night that the Asbury station would cost 30 percent less than a station at Dodge Avenue and that it would likely generate about 30 percent more ridership. 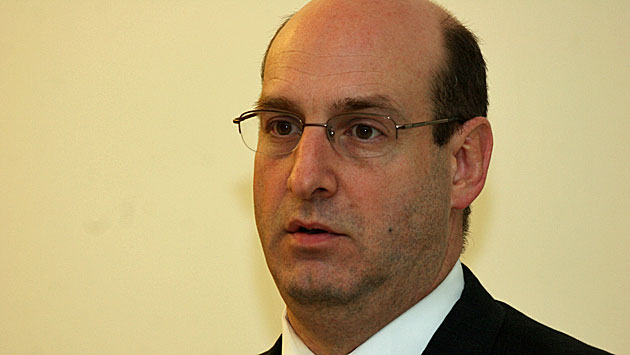 Top: A rendering of what the station house might look like on the west side of Asbury. The view is looking to the northwest. Above: City Engineer Paul Schneider presenting the report Tuesday night.

But what the Asbury station wasn't the winner on was public support in an online survey. In that survey Dodge Avenue won out nearly two-to-one over Asbury.

That preference was apparent at the meeting, where several residents said they still thought Dodge would be the better choice. 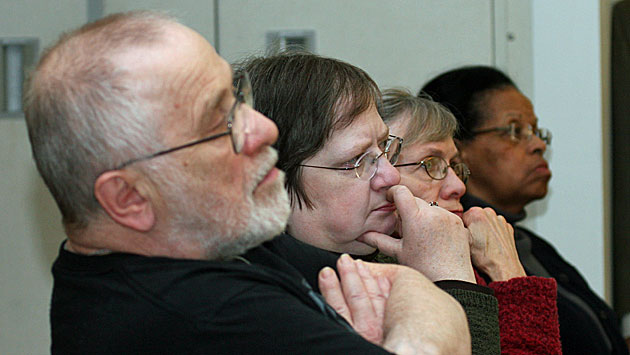 Residents at the Yellow Line meeting at the Levy Center.

Speakers also voiced concern that none of the station proposals included parking for commuters, and suggested that it would be easier to add that at Dodge Avenue.

But Schneider said because there are already commuter parking options at Dempster Street in Skokie and at Howard Street on the Evanston-Chicago border, adding commuter parking didn't seem to be financially justified — at least as part of the initial build out for a new station.

Scheider said other factors favoring Asbury included that it is about a mile from Howard Street, and that spacing is typical for stations in the CTA system.

Also, because the rail line is in a trench at Asbury but elevated at Dodge, the study concluded that noise from a station at Dodge would affect many more nearby buildings. 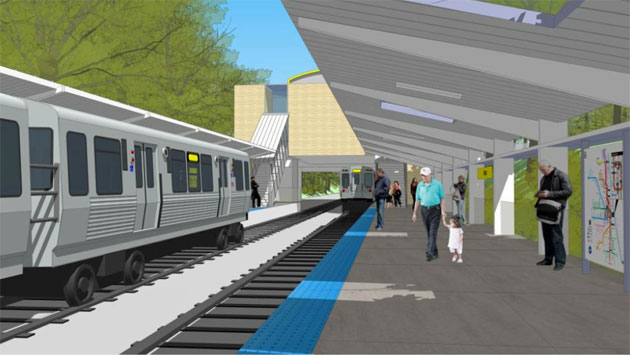 A rendering of what the station platform might look like at Asbury for a southbound passenger looking east.

And, Schneider said, city officials have concluded there is more potential for future development along the Asbury corridor south of the rail line to Howard Street.

If a tax increment financing district were created for the area, such development could help fund the local match cost for the new station.

Schneider said that if federal funds could be obtained for the project, they would typically cover only 70 to 80 percent of the cost, which for an Asbury station is now estimated to total $23 million.

A third alternative, of locating a station at Ridge Avenue was rejected earlier in the review process for a variety of reasons, including difficulties in bicycle access, that two CTA stations are considered to already be within walking distance from that location and limited potential for new economic development in the area.

The recommendation will go to the City Council next month, which will decide whether to accept it and whether to proceed with seeking funds for the next phase of engineering work on the plan.

The presentation from Tuesday night's meeting, and other related documents, can be found online.