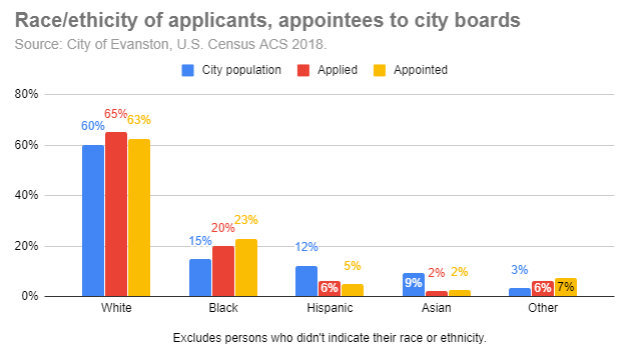 A city staff report to be presented at Monday’s Rules Committee meeting suggests Asians and Hispanics are dramatically underrepresented on Evanston boards and committees — while blacks and whites are somewhat overrepresented.

However, city officials say the data reporting the racial and ethnic identity of people who applied for appointment to the panels since July 2017 is incomplete — with nearly a third of applicants and more than 40% of those appointed not indicating their racial or ethnic identity on their applications.

The data also does not include persons who applied for or were appointed to short-term committees and task forces. Six of the 35 boards and committees listed on the city website are designated as short-term.

On other demographic indicators, for those who provided the relevant data:

The city’s nine wards, which have relatively equal populations, vary rather substantially in the number of residents who apply to be on boards — with the 1st Ward notably low on participation — likely due in part to its high percentage of college students, who traditionally have a low level of interest in most city government issues.

In most wards the share of people who apply for appointment and actually are named to boards ranges between 42 to 51 percent — but the appointment rate is dramatically lower for the 8th and 9th wards where only 25% and 15%, respectively, of those who volunteered were actually chosen.

In the staff memo Deputy City Manager Kimberly Richardson says staff is implementing a new applications system for boards that will require applicants to provide demographic data and that future annual reports for board will include demographic information.